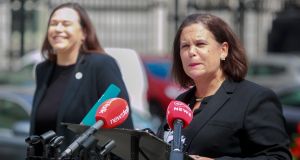 Ms McDonald sued the ex- Louth deputy over the October 11th, 2018 Twitter post, which was in reply to a message she had posted in support of the now-retired Garda Sgt Maurice McCabe.

At the High Court on Thursday Mr Justice Charles Meenan heard that the proceedings had been settled on terms. As part of the settlement an apology by Mr Breathnach, who lost his Dáil seat in this February’s general election, was read to the court by his counsel Darren Lehane Bl.

“On the 11th of October 2018 I published a statement on Twitter concerning Mary Lou McDonald in which I wrongly accused Ms McDonald of being a hypocrite and someone who condoned the murders of members of An Garda Síochána,” he said in his statement.

“I deeply regret that I made these unfounded and damaging accusations and I retract them in full.

“I unreservedly apologise to Ms McDonald for the upset and distress caused by my comments and for my unjustified attack on her reputation.”

Tom Hogan SC, instructed by Johnson Solicitors for Ms McDonald, told the court that the other terms of the settlement were confidential. Counsel asked the court to adjourn the matter for a month to allow for the implementation of the other terms.

Counsel added he did not expect the matter to trouble the court any further, and that final orders could be made on the return date.

Mr Justice Meenan agreed to put the matter back for mention to a date in August.

In her action, Ms McDonald claimed Mr Breathnach’s tweet meant that her sympathy for Mr McCabe was disingenuous, insincere and that she was a hypocrite.

Ms McDonald also claimed that the tweet meant she had failed to speak out about and condoned the murders of members of An Garda Siochana by dissident republicans and criminals.

She alleged that the tweet defamed her, and as well as seeking damages including aggravated damages, she also sought an injunction restraining the ex-FF TD from further publishing the same of a similar statement about her.

In a statement issued after the hearing, Ms McDonald’s solicitor Ms Laura Cunningham said her client was satisfied that her reputation had been “completely vindicated” following the “categoric public apology” made by Mr Breathnach “together with a financial settlement”.

“My client has been left with absolutely no alternative but to take the legal action as a result of an entirely unprovoked attack upon her good name by Mr Breathnach on Twitter,” Ms Cunningham said.

“My client is not prepared to tolerate false and malicious accusations being made against her and today’s announcement reflects this.”