Mother says son had to have 80 assessments for court hearings: ‘System should be easier’ 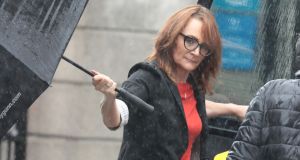 A mother whose 14-year-old disabled son secured a further €3 million payment on Wednesday under a settlement of his action over the circumstances of his birth has told the High Court the system should be easier for families.

The €3m payment for Luke Miggin, who has cerebral palsy, brings to more than €6m the amount secured in settlement of his action over the circumstances of his birth at Mullingar General Hospital in February 2006.

His mother Emily Miggin said this was her son’s fifth time in court since he had initially settled his action in 2011 with a first interim payment amounting to €1.35m. Luke has had to have 80 assessments to date in preparation for hearings to secure court approval for payments, she said. “The system should be easier,” she told Mr Justice Kevin Cross.

She said Luke is a fabulous child who has complex needs and they were blessed with very good carers.

At a previous hearing, Ms Miggin said she would give the money back fivefold to see her son kick a football. She was heartbroken and both her son and she had lost an awful lot.

The latest interim settlement was brought about after mediation and is intended to meet care needs over the next six years. Through his mother, of Ballinadrimna, Athboy, Co Meath, now living in Sutton, Dublin, Luke had sued the HSE and a consultant obstetrician, Michael Gannon, of Mullingar Hospital.

Luke was born just after 5pm on February 28th 2006. The court was previously told, if Luke had been delivered even one hour earlier, he would have escaped injury. Liability was admitted by both defendants.

On Wednesday, Denis McCullough SC, for the boy, said Luke is happy at school and is a bright and enthusiastic child. His mother, a therapist, had given up her job to care for her son full time.

Approving the settlement, Mr Justice Kevin Cross said it was a good one. He thanked Ms Miggin for the care she has given her son and wished the family well for the future. Luke’s case will come back before the court in six years’ time when his future care needs will be assessed.