Delay in dealing with Troubles killings ‘impacting on human rights’ 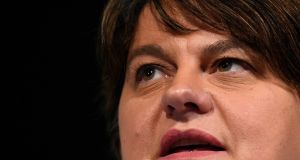 The Democratic Unionist Party leader erroneously took into account the absence of an overall agreed package to deal with outstanding issues from Northern Ireland’s violent past, the judge held.

Despite rejecting claims of discrimination, Sir Paul Girvan said: “The decision to refuse to put the paper on the agenda was procedurally flawed.”

Delivering his verdict on a challenge mounted by the widow of an innocent civilian shot dead along with eight IRA men, he found a “systemic delay” in dealing with Troubles-related killings is impacting on her human rights.

Stormont departments and Secretary of State Karen Bradley must now reconsider whether to provide extra funding for hearings into nearly 100 deaths without waiting for any political agreement, the judge directed.

Brigid Hughes took legal action against the British Government and the devolved administration for allegedly withholding the necessary financial resources.

Mrs Hughes husband, Anthony, died after being unwittingly caught up in the SAS ambush of an IRA unit at Loughgall, Co Armagh in May 1987.

The legal challenge was brought against the Secretary of State, the Stormont Executive and Mrs Foster personally due to her alleged responsibility for the logjam.

Each of them could cost over £1 million to run, the court heard.

Although the Stormont House Agreement includes a £150 million package to deal with all legacy issues, the Government has said financial resources will not be released until political consensus is reached on dealing with the past.

Northern Ireland’s Lord Chief Justice, Sir Declan Morgan, had advanced a plan for having all cases dealt with within five years.

In 2016 a paper was drawn up by the DoJ to bid for funds based on Sir Declan’s blueprint.

Lawyers for Mrs Hughes alleged Mrs Foster stopped it from being discussed by her Executive colleagues for political reasons.

It was claimed that she would not allow a process which would “rewrite the past” because most of the inquests concerned state killings.

She had been focused on balancing the limited £150 million budget for dealing with all outstanding legacy issues, the court heard.

Counsel for the Northern Ireland Office also claimed that financial package could have been drained by the inquest funding bid alone.

Officials were said to be concerned the DoJ paper only covered 16 of the cases at a cost of nearly £17 million, lacked a proper business model, and reform proposals may have left nothing for other planned new bodies.

But Sir Paul held there was a legal flaw in Mrs Foster’s decision not to permit the paper to go before the Executive Committee.

“The former First Minister was in error in concluding that it was legally proper to defer consideration of the question of seeking additional funding to deal with the systemic delays in relation to the legacy inquest until an overall package was agreed in respect of the outstanding legacy issues,” he said.

“She was in error in concluding that it was legally proper to defer consideration of the funding issue because in the absence of an overall package the provision of additional funds to deal with the systemic delays in the legacy inquests would favour victims who were not innocent as against innocent victims of the Troubles.”

Turning to the discrimination claim made against her, the judge pointed to her view that legacy inquests would produce an imbalanced outcome between different categories of victims.

If anything, he said, her decision favoured members of the security forces involved in the killings.

“This is not discrimination on the grounds of the religious or political opinion of the next of kin even though a preponderance of them may have come from one section of the community,” he ruled.

“The case for discrimination has thus not been made out.”