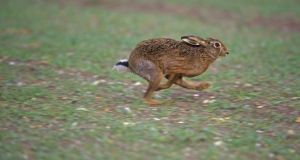 The Irish Coursing Club says its exclusion from the list of permitted sports is flawed, irrational and unreasonable. Photograph: iStock

The High Court will next week hear an application by the Irish Coursing Club for an injunction allowing coursing activities to resume.

The club is seeking the injunction, in its judicial review proceedings against the Ministers for Health and Housing, Local Government and Heritage, because the annual coursing season is due to finish at the end of February.

The Ministers oppose the proceedings and an injunction allowing coursing events to take place, subject to various Covid-19 measures.

When the matter was briefly mentioned before Mr Justice Charles Meenan on Thursday, he said the injunction application could be heard next Tuesday.

Earlier this month, the club, which regulates hare coursing here, began a challenge over the State’s failure to include coursing in a list of activities allowed operate during the current Covid19 restrictions.

The Irish Coursing Club , represented by Martin Hayden SC and Eoin O’Shea BL, claims coursing events were allowed take place during the run up to Christmas due to its inclusion on a government approved list of permitted sports. Mr Hayden said, because the season ends in a few weeks, it was vital for Irish Coursing Club members that the application for an injunction, which would remain in place until the full action had been determined, be heard as soon as possible.

It further seeks an injunction allowing it to resume its activities pending the outcome of its full judicial review.

The Irish Coursing Club says its exclusion from the list of permitted sports is flawed, irrational and unreasonable on grounds the Minister for Health decided to delist coursing without consulting the Departments of Agriculture and Housing, Local Government and Heritage. Those departments are responsible for coursing, the Irish Coursing Club claims.

It also alleges that the decision to delist it is tainted by a perception of bias because Mr Donnelly had in 2015 voted in favour of legislation banning coursing. The Irish Coursing Club also alleges, in advance of the delisting decision, Mr Donnelly had consulted with Green Party Ministers Eamon Ryan and Catherine Martin, who also want coursing prohibited.