Brain-damaged boy gets apology and €2.8m payment from HSE 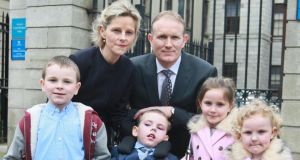 The Costello family - L-R: Pat (6), Mary, Gerard, Tadgh (8), Kate (7) and Grace (4) leaving the High Court on Friday after Tadgh was awarded €2.8 million interim payment and received an apology from the HSE for injuries caused during his birth in 2006.Photograph: Courts Collins.

A brain-damaged boy has received an interim payment of €2.8 million and an apology from the HSE under a settlement of his High Court action over injuries suffered during his birth at Kerry General Hospital.

His mother Mary Costello told Mr Justcie Kevin Cross the family had been treated very badly for the last nine years and liability had not been admitted in the case until last month.

A consultant involved in the case had, after the birth, shown remorse and cried during a private meeting with herself and her husband Gerard but the HSE then fought the case for the next nine years, she said.

“It was very hurtful that the HSE defended the case against us. We were trying to deal with the grief of what had happened and for them not to admit liability added insult to injury,” she said.

Through his mother, the child sued the HSE over the circumstances of his birth at Kerry General Hospital on May 25th 2006.

Liam Reidy SC, for Tadhg, said there was a two hour delay in delivering the baby during which he suffered brain damage.

At the outset, an apology to the family was read in court on behalf of the HSE.

In the apology, TJ O’Connor, the manager of Kerry General Hospital said: “We would like to apologise unreservedly to both of you and to your son Tadgh for the injuries he sustained at his birth in 2006. Sadly, we are unable to change what happened to Tadgh, but we would like to inform you that we have since introduced specific guidelines and protocols to assist us in preventingÂ  adverse outcomes in the future.”

The apology continued: “We understand how life-changing and difficult this has been for you. We recognise that the past eight years have been extremely difficult for you and your family. We are glad that the settlement today enables your family to meet Tadgh’s needs. On behalf of HSE, we are sincerely sorry for what occurred.”

Mr Reidy told the court that, in November 2006, a consultant obstetrician had during a private meeting acknowledged wrong had been done and had cried with the parents.

The benefit of that meeting had been soured as the family had spent nine years looking after their son without any supportsÂ  and fightihng a legal battle, counsel said. Liability was admitted in the last four weeks and only after a threat in relation to claiming aggravatged damages had been made, he added.

Approving the settlement, Mr Justice Kevin Cross said the courage and love of parents like the Costellos’ was “an inspiration”.