Athlone Town FC stadium row over whether €660,000 was gift 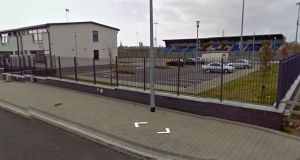 The dispute is over an application by the secretary of Athlone Town Football Club, to remove Athlone Stadium Ltd as trustee on the property, which became the new home of the club when it moved from its traditional town centre home at St Mel’s to Lissywollen, Athlone. File photograph: Google Street View

A central issue in a legal dispute over ownership of a football stadium in Athlone, Co Westmeath, concerns whether a €660,000 contribution to the development of the facility was a gift, the High Court has heard.

The dispute is over an application by David Dully, secretary of Athlone Town Football Club, to remove another company, Athlone Stadium Ltd, as trustee on the property, which became the new home of the club when it moved from its traditional town centre home at St Mel’s to Lissywollen, Athlone.

The majority shareholder in Athlone Stadium Ltd is Declan Molloy of Garrynafela, Athlone, who has a 97 per cent stake.

Mr Dully says Athlone Stadium Ltd should be removed as a trustee and replaced by a trustee proposed by the Football Association of Ireland (FAI) and/or by Athlone Town AFC Company. The FAI is a notice party in the case.

Mr Justice Richard Humphreys was told on Monday a number of witnesses will have to be called in the case.

An amended summons had been served by the Dully side and the judge directed the defendant to provide a replying affidavit with a view to possibly getting the case on for hearing before the end of July.

Dr Michael Forde SC, for the defendant, said the main issue was over whether a sum of €660,000 given by Mr Molloy was a gift.

Dr Forde said his client had no information as to how it came about as a gift.

His client was ready to provide a replying affidavit immediately to the amended summons by Mr Dully, counsel added.

The case comes back for mention next month.