Former garda to be sentenced for passing on confidential information 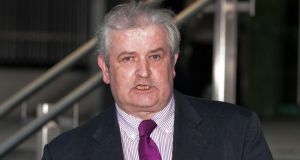 A sacked garda was before a court yesterday for passing on confidential information to third parties. Daniel Tarrant (51) personally and indirectly accessed confidential data on the Garda Pulse system to give to retail security firms who were clients of his partner.

Det Garda Sgt Tommy Murphy said that the garda’s motivation had been to help his partner preserve a good business relationship with the firms as she had no licence to provide security services.

Det Garda Sgt Murphy told Colm Ó Briain, prosecuting, that Tarrant explained the gun was a family heirloom he inherited after his father’s death which he had never bothered to register.

Gardaí began investigating Tarrant’s mobile phone records after a tip-off from the National Bureau of Criminal Investigation in November 2011 about data protection breaches. Tarrant, who had been stationed at Finglas Garda station, was dismissed after 27 years in the force following the investigation. He is entitled to a pension but he will not have access to it until he is 60.

The information he accessed from Pulse records related to a security firm’s business competitor on one occasion and on another it was personal details of a known shoplifter. Tarrant admitted he had accessed the records personally and by asking colleagues.

Det Garda Sgt Murphy agreed with Dominic McGinn SC, defending, that there was no criminal context in Tarrant’s offences. He said his client acted out of “misguided loyalty” to his partner and asked Judge Mary Ellen Ring to recognise that Tarrant has already been punished through losing his career and good character.

Mr McGinn told her there was no reality in a fine, which is up to €100,000 for a Data Protection Act breach, since his client was “on the breadline”.

Judge Ring adjourned sentencing for a Probation Services report to see if Tarrant was suitable for community service in lieu of a prison sentence for the firearms offence. She remanded him on continuing bail until next month.

1 Coronavirus: Varadkar returns to practising medicine to help during crisis
2 Donald Trump’s clown car administration has put the fear in all of us
3 Irish doctors on getting Covid-19: ‘In 90 minutes, I deteriorated quite rapidly’
4 Genetics shed light on origins of Irish strains of Covid-19
5 Dublin criminal Lawlor may have been shot dead by man who owed him money
Real news has value SUBSCRIBE