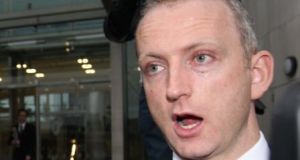 Solicitor Cahir O’Higgins faces five charges, including theft and attempting to pervert the course of justice.

A high-profile criminal defence solicitor is to stand trial accused of theft and perverting the course of justice.

Cahir O’Higgins (45) had been charged last month and was given bail with his case listed for the first time on Tuesda y before Dublin District Court.

Mr O’Higgins, who denies the charges, did not have to come to court. Due to the Covid-19 crisis most defendants have been excused from attending their cases.

The Dublin solicitor is accused of theft of €400 belonging to a Spanish man who was a defendant in District Court proceedings, on July 30th, 2016.

The theft allegedly happened at a Londis shop, on Parkgate Street, close to the Criminal Courts of Justice building.

This offence is contrary to section four of the Criminal Justice (Theft and Fraud Offences) Act 2001.

Mr O’Higgins was also accused of four counts of perverting the course of public justice contrary to common law, on December 8th and December 17th, within the State and at the Bridewell Garda station in Dublin.

These charges allege intent to pervert the course of public justice, by producing to investigating Det Garda Colm Kelly a copy of notes purportedly made by him on July 30th, 2016 which contained information that he knew to be untrue and that he knew the notes were not made on this date.

These offence are in the context of a criminal investigation into the theft allegation.

Evidence of arrest, charge and caution was given by Det Garda Colm Kelly.

He told District Court president judge Colin Daly that on April 7th last, he arrested Mr O’Higgins at 2.28pm at the Bridewell Garda station. He was then charged with the five offences.

He was cautioned and his reply to all charges was: “I am surprised at this allegation, I am not guilty, I will answer it at the appropriate time in court.”

The judge heard that the Director of Public Prosecutions (DPP) has directed trial on indictment on all matters. This means the solicitor will face trial before a judge and jury in the circuit criminal court.

Defence counsel Karl Monahan told the judge, “there is an issue of prosecutorial delay in this case.”

The judge told him that was a matter for the trial but the barrister replied that he was required to put it on record at this point.

The case was adjourned for a book of evidence to be completed by the DPP and served on the accused at the next hearing on June 16th in the district court.

Mr O’Higgins, whose practice is based at Dublin’s Parkgate Street, has repeatedly featured among the top legal aid earners, and has represented defendants at every level of the criminal justice system.