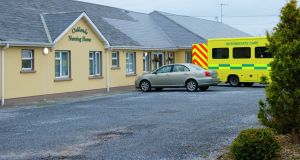 The HSE has taken over a north Kerry nursing home on Thursday evening and is making alternative arrangements for its elderly residents on foot of an order sought at short notice at Listowel District Court in the morning.

The application by the chief inspector of social services at Health Information and Quality Authority (HIQA) further succeeded in cancelling the registration of the company operating Oaklands, Bolden (Nursing) Ltd as the registered provider of a nursing home.

The HSE was a notice party in the proceedings, barrister for HIQA Brian Gageby informed the court.

The HIQA team who entered the nursing home on November 4th on foot of residents testing positive “found a centre in chaos”, deputy chief inspector of social services with HIQA, Susan Cliff said .

There had already been “a high level of concern” already and this year there had been seven inspections.

There had been concerns that management structure was insufficient, and there was concern the culture in the centre needed to become “more person-centred”, she said.

Those concerns were heightened because of Covid-19 .

When inspectors visited on September 30th last they again found a poor culture of care, and there were very “specific issues”, she said.

There were no empty rooms brought together for patients who might test positive for Covid-19, she said.

“All staff were in contact with all patients,” she also said.

There was no proper supervision of care of residents and there were concerns surrounding meal times.

Domestic cleaning products were still in use, and not those for Covid-19.

An inspector noticed how a career entered a room with a meal and brought back a full plate of food from the patient’s room. The full plate of food was discarded in front of a nurse the nurse never questioned if the man ate the food or wanted something else, Ms Cliff outlined.

Poor nutrition was a heightened risk for Covid 19, she said.

On November 4th last, on foot of information that a number of residents tested positive, the HSE “immediately” sent a team.

“They found a centre in chaos,” Ms Cliff said.

Residents were “wandering unsupervised” and those who tested positive were mingling with non-positive residents.

Some staff had tested positive and were asymptomatic and residents were not notified. Residents with “classic” Covid-19 symptoms - coughs and temperatures - were not being monitored.

“Alarm bells should have been firing off in this centre and it didn’t happen,” Ms Cliff said.

There were “no restrictions or checks on people coming or going” to the centre. When inspectors entered the centre in on November 4th, they were no checks.

“It was a centre in chaos on that day,” she replied to Judge Waters.

There were concerns about medication management, the deputy chief inspector outlined.

The IT system was out of order and there was nothing to back it up. End of life medication prescriptions were out of date, she said.

The result of this would be that patients may not get the medication required to make them comfortable in their last days, she explained to her counsel Brian Gageby.

The respondent, Bolden Ltd, was not represented in court. However, there was consent to the application, the court also heard.

Judge Waters said he had heard enough and said, given the poor clinical governance and the poor infection control measures, he was satisfied there was “serious risk to life and welfare of persons in the centre”.