Daniel O’Callaghan (30) remanded in custody for a week 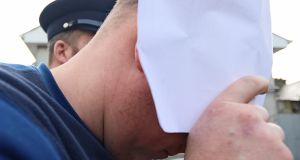 Daniel O’Callaghan hides his face as he is escorted into Virginia Courthouse on Friday morning.

A former Armagh club footballer has been charged in relation to the attempted theft of an ATM machine in Virginia, Co Cavan last year.

The defendant covered his face with a white sheet of paper as he arrived at the courthouse.

Appearing before Judge Denis McLoughlin he was charged with the attempted theft of the ATM machine on Main Street, Virginia on August 14th last year and being in possession of a stolen digger on the same date.

He was also charged with entering the Lake House, Virginia as a trespasser on an unknown date between August 14th and 17th last year, with intent to commit an offence or interfere with the building.

The court heard that when the charges were put to him just before midnight on Thursday night, he made no reply.

No application for bail was made and he was remanded in custody to appear before Harristown District Court again on January 17th.