Cranberries singer shouted ‘I’m an icon, I’m the Queen of Limerick’ during incident at Shannon 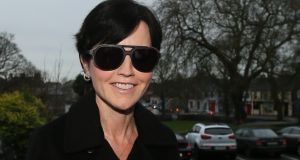 Cranberries singer Dolores O’Riordan shouted: “I’m an icon, I’m the queen of Limerick” during an incident at Shannon Airport where she headbutted and spat in the face of a garda.

An outline of the incident on November 10th last year was given at Ennis District Court yesterday, where the 44-year-old mother of three pleaded guilty to a number of air rage-related offences.

The court heard that O’Riordan had initially become quite difficult on a New York to Shannon flight where she stepped on the foot of an Aer Lingus flight attendant, Carmel Coyne, and airport police officers were notified.

Insp Tom Kennedy said O’Riordan told an airport police offer: “You can’t arrest me. I’m an icon, I’m the queen of Limerick. You don’t know who you are dealing with. I pay my taxes so I pay your wages and I am going to sue.”

He said O’Riordan, of Friarstown, Grange, Kilmallock, Co Limerick, was “quite irrational, quite aggressive, quite difficult”.

He said that after she escaped from the patrol car, Garda Shane Dawson gave chase and on apprehending her, O’Riordan “turned around and headbutted him into the face and spat into his face”.

He added: “She then alleged that Garda Dawson had grabbed her and claimed that he sexually assaulted her by groping her. It was a very nasty situation for Garda Dawson and for all concerned.”

Insp Kennedy told the court that Garda Dawson was on sick leave for five days as a result of the headbutt.

Garda Dawson told the court that the incident “ranks as one of the worst I have ever had to deal with”.

Solicitor for O’Riordan Bill O’Donnell accepted on behalf of his client that there was no substance to the allegation made by her against Garda Dawson. In his plea of mitigation, Mr O’Donnell said “these were the actions of a very, very ill person” who “was somewhat out of control”.

He said O’Riordan was going through a very, very difficult time having recently separated from her husband of 20 years. “She moved to New York city and hadn’t seen her children for two months, who live in Canada, and was living out of a suitcase in New York.”

Mr O’Donnell said O’Riordan was returning to Ireland for the second anniversary of her father’s death. “This was a very emotional time for my client and she was not in a good place.”

He handed into court medical reports on O’Riordan, with one psychiatric report concluding that her actions “were of a person suffering a severe psychiatric illness”.

During one consultation with O’Riordan in the days after the incident, Mr O’Donnell said a medic concluded that she was paranoid and delusional.

O’Riordan was shortly afterwards admitted to St Patrick’s psychiatric hospital and remained there for three weeks.

Mr O’Donnell said there was no intention by O’Riordan to commit the actions on the day and she did not fully remember what had occurred.

He said she had no previous convictions, had travelled around the world with her career since she was 18 and had never had an incident on a plane before last November.

Another medical report concluded that O’Riordan’s prognosis for the future was positive but she would require medication in the longer term to manage her condition.

O’Riordan pleaded guilty to assaulting Garda Shane Dawson and two members of the airport police at Shannon, Ronan O’Reilly and Eamon Power, on November 10th, 2014. She also pleaded guilty to resisting/wilfully obstructing Garda Dawson in the execution of his duty.

Judge Patrick Durcan adjourned the case for mention to January to fix a date for sentence.