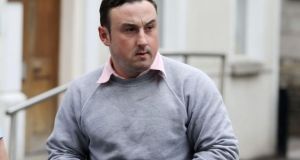 A former detective inspector who oversaw the investigation into the shooting of Detective Garda Adrian Donohoe has described the accused man’s story of his movements on the night as “bunkum and lies”.

Retired detective Mr Pat Marry on Thurday told the Central Criminal Court he did not believe the accused man Aaron Brady was at a diesel laundering yard in south Armagh that night but that he was at Lordship Credit Union where the detective garda was shot dead.

Aaron Brady (28) from New Road, Crossmaglen, Co Armagh has pleaded not guilty to the capital murder of Det Gda Adrian Donohoe who was then a member of An Garda Siochana on active duty on January 25th, 2013 at Lordship Credit Union, Bellurgan, Co Louth. Mr Brady has also pleaded not guilty to a charge of robbing approximately €7,000 in cash and assorted cheques on the same date and at the same location.

Michael O’Higgins SC for the defence opened his cross-examination of Mr Marry by saying he wanted to look at whether his client might have been laundering diesel at the time of the robbery that resulted in Det Gda Donohoe being shot dead.

Mr Marry told Mr O’Higgins that Mr Brady had lied to a garda on the day after the shooting when asked to give an account of his whereabouts. The witness said Mr Brady also told his then girlfriend Jessica King to lie for him about his movements that evening. Ten days later Mr Brady gave an account to gardaí in which he said he was at a diesel laundering yard on Concession Road in Cullaville, Co Armagh for about 15 minutes between one hour and 90 minutes before the shooting.

Mr Marry agreed that a lot of CCTV was analyzed in the investigation and that so much CCTV had been gathered that an external hard drive was required to be built by Dell to deal with the volume.

He said it is the norm to check every aspect of an investigation, including the movements of persons of interest in the lead-up to a crime. He agreed that other people who gave statements that they went to buy a television in Argos or to other locations on the day of the shooting had their accounts verified by gardai.

Mr O’Higgins pressed the detective, asking him why Mr Brady’s statement that he was laundering diesel on Concession Road wasn’t checked out.

The former detective said it was checked out. He said Mr Brady had not provided an exact address for the yard but investigators used a description he had given to locate a yard they believed was the one he was talking about. Gardaí also asked the Police Service of Northern Ireland to gather CCTV in the area, they interviewed witnesses, carried out phone analysis on the road leading to the yard and outside the yard and consulted the crime and security section for intelligence on diesel laundering on Concession Road. He said the CCTV found was of poor quality but it was examined and there was no evidence found that the car Mr Brady said he was traveling in was in that area at the relevant time. He added: “So that was very evident to me that the story told by Aaron Brady was bunkum and lies.”

He later said: “I was cognisant of the fact he had told other stories that didn’t turn out to be true so I had no great confidence in what he was telling the gardai because I believed he was involved in the murder of Detective Garda Adrian Donohoe.”

He said the yard was not relevant to his investigation because he did not believe Mr Brady was there. He also asked why Mr Brady had provided an alibi before the trial in which he said he was at the diesel laundering yard for two hours whereas in 2013 he told gardai he was there for only 15 minutes.

When Mr O’Higgins put it to him that he still had a duty to investigate regardless of what he believed to be true, the witness said that he had to take into account all the information he had and in respect of the yard, he didn’t believe Mr Brady was there. He asked why, if Mr Brady was at that location, he didn’t say that to the garda that he spoke to on the afternoon following the shooting.

He said that on Mr Brady’s account in February 2013 he was at a house on Lough Road at the time of the shooting and not at the yard.

Mr O’Higgins said that the description Mr Brady gave of the yard was “fact rich” in that it described a forklift with a flat tyre, purple cubes of diesel waste, a truck and other items. He suggested that it might have been useful for gardai to examine the site to see if his description was true and if those items were not there it would “blow this story out of the water” and show that he was telling lies from the outset.

Mr Marry said gardaí had done a number of things but said it wasn’t deemed relevant to view the site because he did not believe Mr Brady was there. He also pointed out that gardaí came into possession of photographs of the site arising out of a separate court case within two months of the shooting.

Mr O’Higgins put it to him that phone traffic between Mr Brady and a number of other people, including one known fuel launderer, on the week of the murder appeared to relate to fuel laundering. The inspector said that gardai had received a statement from the known fuel launderer to that effect but added: “Do we believe him?”

The cross-examination will continue tomorrow in front of Mr Justice Michael White and a jury of six men and seven women.