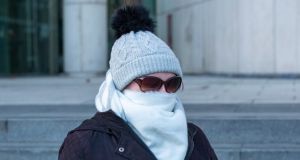 The jury in the trial of a man accused of murdering a retired hospital worker, whose dismembered remains were found scattered at nine different locations in the Dublin and Wicklow mountains, have been watching CCTV footage of her family’s movements outside her home on the day of the alleged killing.

The trial also heard that gardaí watched a total of 343 hours of footage from the front and back of the Rathfarnham house, which was captured on a neighbour’s camera over a two-week period in 2017.

The jurors spent Tuesday watching CCTV evidence at the Central Criminal Court, where father-of-three Kieran Greene is on trial charged with murdering Patricia O’Connor. Mr Greene (34) has pleaded not guilty to murdering Mrs O’Connor (61) at her home in Mountainview Park, Rathfarnham, Dublin 14 on May 29th, 2017.

The deceased’s daughter Louise O’Connor (41) and granddaughter Stephanie O’Connor (22), both of Millmount Court, Dundrum Road, Dublin 14, and Louise O’Connor’s ex-partner Keith Johnston (43), of Avonbeg Gardens, Tallaght, Dublin 24 are all charged with impeding the apprehension or prosecution of Kieran Greene, knowing or believing him to have committed an arrestable offence, to wit the murder of Mrs O’Connor on May 29, 2017.

The trial has heard that the body of Mrs O’Connor was dismembered into 15 separate parts that were found at nine different locations over a 30km range in the Dublin and Wicklow mountains between June 10 and 14, 2017.

Former Depute State Pathologist, Dr Michael Curtis, has given evidence that Mrs O’Connor’s head was struck a minimum of three blows with a solid implement and the cause of death was blunt force trauma to the head.

Garda Alan Thompson told Ms Small that he viewed CCTV footage of the house between May 29th, 2017 at 7am until June 12th, 2017 at 2pm and noted any activity. In total, he viewed 343 hours of footage, he remarked.

CCTV footage commencing on May 29th at 10.28am was then played for the jury, showing movements at the front and rear of Mrs O’Connor’s house.

It is the prosecution’s case that Mr Greene murdered Mrs O’Connor at some point after 18.35 on May 29th, when she is last seen entering the house from the rear garden.

At 6.53pm on May 29th, Louise O’Connor, Stephanie and some children can be seen walking down the driveway and turning left, said Gda Thompson, adding that Stephanie can be seen wearing a maroon jacket, maroon leggings and boots.

At 6.54pm, the witness said Louise can be seen returning to the house and walking up the driveway. A minute later, she walks down the driveway with a cream handbag and turns left.

At 6.56pm, Patricia O’Connor’s husband Gus O’Connor walks down the driveway and turns left, he said.

The witness said Mr Greene can be seen opening the curtains and back door at the rear of the house at 8.44pm, before closing the door again.

At 8.51pm, Louise O’Connor, Stephanie and some children can be seen leaving Tesco at Nutgrove and returning to Mountainview at 9pm, he said. Louise, Stephanie and Mr Greene are seen in the back garden at 9.15pm that night, he continued.

At 9.34pm, a female, not identified to the jury, can be seen leaving the front of the house and walking quickly down the driveway before turning left, said Gda Thompson. The female is wearing a dark green coat with dark trousers and has a black suitcase in her right hand.

A minute later, Louise O’Connor walks down the driveway to the footpath and looks left before going back inside the house. She does this again at 10pm, said the witness.

At 10.05pm, Gda Thompson said a female with a suitcase appears at the left-hand side of the house and goes in the back door. She closes the back door a minute later.

It is the prosecution’s case that at no point in time in CCTV footage can Stephanie O’Connor be seen as herself leaving Mountainview Park on the night of May 29th and that, in order to cover up the alleged murder, she dressed up as her grandmother as “a ruse” to pretend that Mrs O’Connor had stormed out of the house.

Gda Thompson said Gus O’Connor is seen walking up the driveway with a dog at 10.23pm. Gus and Louise are then seen talking at the back of the house at 10.59pm, before going inside.

The jury then saw footage going into the early hours of May 30th and later that day. At 00.39am, Mr Greene is seen emerging from the left side of the house carrying two long-handled objects, he said.

At 00.40am, Gda Thompson said a Toyota Corolla car is driven out of the driveway and reverses back in. Ten minutes later, a male is seen carrying a spade and puts it into the car before the car is driven away at 2.09am, he remarked.

At 2.16am, Gda Thompson said Mr Greene is seen driving into Texaco Spawell Service Station in Templeogue and puts €40 worth of fuel into the car. He pays for the fuel and buys an LED lamp before returning to the car and driving off.

At 5.54am, the Toyota Corolla reverses into the driveway of Mountainview and a male gets out of the car, he continues.

At 6.10am, Gda Thompson said Mr Greene goes into the garden and is holding a pair of shoes. He places the shoes on a bin at the side of the house.

A few minutes later, Mr Greene appears to have black bin bags on him and puts items of clothing into them, he said. He is seen tearing a black bin bag from the roll and places it on the bin. He then pours water from a watering can onto the ground and brushes it.

At 8.57am, Mr Greene leaves the house to bring his two sons to school. He is later seen walking out the back of the house carrying blankets or clothes and places them on the bin bag, he said.

On June 1st, Mr Greene is seen carrying a black sack down his driveway which he puts into the passenger side of the car, he said. At 1.39pm that day, Keith Johnston walks up the driveway to the house and is later seen with a piece of timber in the garden. He looks like he is fixing a kitchen press door at 2.35pm, said Gda Thompson.

The trial has heard that while in custody, Mr Greene changed his account of killing and dismembering his partner’s mother, six months after he was charged with her murder.

Evidence has been given that Mr Greene walked into Rathfarnham Garda station on June 12th, 2017 and told a detective that he had done “something terrible” and dismembered the body of Mrs O’Connor on his own. However, the accused man told gardai on December 9th that he had taken “the rap” and felt he was being set-up, as his girlfriend Louise O’Connor subsequently started going back out with her ex-boyfriend Keith Johnston.

Mother-of-five Louise O’Connor has pleaded not guilty to agreeing to or acquiescing in her daughter Stephanie O’Connor disguising herself as Patricia O’Connor at Mountainview Park, Rathfarnham, Dublin 14 on May 29, 2017 in order to conceal the fact that Patricia O’Connor was dead.

The trial continues tomorrow before Mr Justice Paul McDermott and a jury of six men and six women.