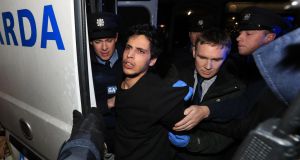 A Japanese man who came to Ireland to improve his English was stabbed to death on a public street by a man with paranoid schizophrenia, a barrister has told the Central Criminal Court.

Mohamed Morei (20), of no fixed abode, has pleaded not guilty by reason of insanity to murdering Yosuke Sasaki (24) at Long Avenue, Dundalk, Co Louth on January 3rd 2018.

Opening the trial on Tuesday, Sean Gillane SC for the State told the jury of seven men and five women that this was a “tragic case” and that the evidence of two consultant psychiatrists will show “that Mr Morei was, at the time, a very very unwell person whose thoughts were disordered to the extent that for a period of time there was a concern about whether he would be fit to plead and stand trial.”

Mr Gillane said the deceased was a “fine young man”, a hard worker who was very intelligent and dedicated to trying to improve himself. In a bid to learn English he joined a WhatsApp group and from that he met an English woman who wanted to learn Japanese.

“Their friendship blossomed into a relationship,” counsel said and, after having difficulties getting a visa to go to England, Mr Sasaki came to Dublin where he studied before moving to Dundalk to work at the National Pen factory.

He worked a night shift on January 2nd and completed his shift in the early hours of January 3rd 2018. Having left work he made his way towards a post office to pick up something he had ordered online. At the same time members of the public in Dundalk noticed a man with a non-Irish appearance acting “erratically” and “menacingly” on the street.

Shortly before 9am, counsel said, the accused approached Mr Sasaki from behind and stabbed him with a knife. The injury caused him to fall to the ground and despite medical intervention he died as a result of the single stab wound.

Immediately after the stabbing another man named Dylan Grehan encountered the accused and was also struck from behind. When he got to work, Mr Grehan realised he had suffered a wound from a sharp implement. A third man named Cian Murphy was also attacked by the accused a short distance away, counsel said.

During interviews with gardaí counsel said it was apparent that Mr Morei was showing disordered thoughts, was agitated and “what he was saying didn’t appear to make sense”.

He was assessed by a consultant psychiatrist, charged with murder, and committed to the Central Mental Hospital where he has remained since. Mr Gillane said the evidence of Dr Paul O’Connell and Dr Brenda Wright will satisfy the jury that Mr Morei was diagnosed with paranoid schizophrenia, a mental disorder, and at the time of the offence he didn’t know what he was doing was wrong and was unable to refrain from the acts.

The trial continues in front of the jury and Ms Justice Carmel Stewart on Wednesday.