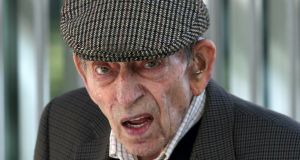 John Joe Kiernan (86) of Forthill, Arva, Co Cavan, was not jailed for the repeated sexual abuse of two children over six decades ago. Photograph: Collins

A former farm labourer has received an eight year suspended sentence for the sexual abuse of two siblings and the rape of one over six decades ago.

John Joe Kiernan (86) repeatedly abused the brother and sister when they were aged between four and ten. He raped the girl in her bedroom and threatened to “bury you with all the other bones” after another attack.

Mr Justice Michael White said that if Kiernan was a younger man the court would imposed a serious custodial sentence but, given his age and ill health, he did not think it was appropriate to jail him.

Kiernan of Forthill, Arva, Co Cavan pleaded guilty at the Central Criminal Court to 11 sample counts of indecent assault and one count of rape between 1958 and 1963. All the offending took place on or near the victims’ family farmland in Arva where Kiernan worked as a farm labourer.

Mr Justice White imposed sentences of eight years for the rape and five years and two years for the indecent assaults. He suspended all sentences in their entirety on condition that Kiernan keep the peace.

The judge said the court’s function was not to exact revenge but to protect society and deal with victims and with rehabilitation. He said it was not appropriate to impose a custodial sentence in this case.

Kiernan is in chronic ill-health, with conditions including heart disease, osteoarthritis, obstructive pulmonary lung disease and diabetes. Mr Justice White said that Kiernan was now confined to his home due to his ill-health and required ongoing care from his wife.

He noted that Kiernan has also already served a five-year sentence imposed in 2005 for sexual and indecent assaults, carried out between 1963 and 1973 against three boys and one girl and is alienated from his own children.

Mr Justice White said he accepted Kiernan was remorseful. The court heard he had initially tried to minimise the seriousness of the offences when first questioned about them but is now aware how serious they are.

At the sentencing hearing last week Mr Justice White praised the “unbelievable courage” of the victims for going to gardaí last year.

Monica Lawlor BL, prosecuting, told the court that the two victims, who are now in their 60s, wished for Kiernan’s name to be published.

Detective Sergeant Sharon Walsh told the court that Kiernan would regularly abuse the children. He would orally rape the boy on fishing trips and this victim told gardaí: “I never remember being afraid. This was just normal life for me”.