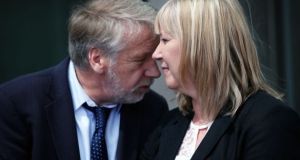 A file image of Securicor worker Paul Richardson and his wife Marie outside the Criminal Courts of Justice in Dublin. Photograph: Collins Courts

After five trials and two appeals over an 11-year period, the Court of Appeal has upheld a gang’s convictions for the tiger kidnapping of a Dublin family as part of a €2.08m cash-in-transit robbery.

In a judgement released electronically on Monday, as part of measures put in place to reduce the risks presented by the Covid-19 pandemic, the appellate court found it was not persuaded of the merit of any of the grounds of appeal advanced by the gang.

President of the Court of Appeal Mr Justice George Birmingham, who sat with Mr Justice Patrick McCarthy and Ms Justice Isobel Kennedy, said the court was satisfied the convictions were safe and would dismiss the appeals.

In their last trial in January 2018, Mark Farrelly (48), David Byrne (46) and Niall Byrne (37) had pleaded not guilty to the false imprisonment of Paul Richardson’s family at their Dublin home in Ashcroft, Raheny and to robbing Securicor of €2.08 million on March 14th, 2005.

Dublin Circuit Criminal heard that the Richardson’s home was raided on a Sunday evening. The gang forced Mr Richardson to go to work the next day while his wife and their teenage sons were held at gunpoint in the Dublin mountains until he had delivered the cash to the carpark of the Angler’s Rest pub.

In their latest appeal, Farrelly, David Byrne and Niall Byrne had argued their convictions were unsafe because the gathering of evidence by gardaí was unconstitutional and should not have been excused as being an “unconscious” breach, in line with the exclusionary rules of evidence set down in the 2015 Supreme Court case of ‘JC’.

In that ruling, the Supreme Court found that evidence obtained unconstitutionally is admissible if the prosecution can show the breach was inadvertent.