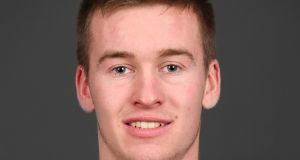 A young Offaly rugby player was killed in a farm accident involving a trailer which had a design fault, an inquest has heard.

The Health & Safety Authority (HSA) and Armagh-based manufacturer NC Engineering this month issued a safety alert in relation to the trailer and urged owners to return them to their suppliers, the inquest was told.

Adam Mangan, a 19-year-old college student, died instantly from head injuries when he was struck by the tailgate of a HC 300 trailer on a farm at Derryarkin, Rhode, on October 3rd, 2015.

He was a talented young sportsman with Kilclonfert GAA club who played minor football for Offaly and underage rugby for Leinster.

The inquest into his death in Tullamore on Monday heard he had been picked up from his home at Barnaboy, Daingean by Thomas Boland Jnr that morning and they had gone to the Boland farm at Derryarkin, Rhode, to work for the day.

Thomas Boland Jnr was moving gravel with a tractor and 14-tonne trailer and the tragedy occurred when Adam Mangan came to help him.

Mr Boland had raised the trailer to tip a load and then noticed that the trailer was not going down properly.

After he and Adam Mangan looked at it Mr Boland returned to the tractor cab. He then heard a bang and looked out and saw the deceased’s torso and legs at the back of the trailer. The tailgate, weighing 250kg, had come down on Adam Mangan’s head.

Mr Boland screamed for help and though his mother Maureen went down from the nearby farmhouse immediately, she saw that the young man had already died and whispered a prayer in his ear.

Dr Nurul Nor, consultant pathologist at Tullamore Hospital, carried out a post mortem and concluded that death had been caused by catastrophic injuries to the head resulting in extensive brain trauma.

John Hayes, an engineer engaged by the HSA to investigate the accident, said that although the trailer was badly maintained there was a design fault with it and the incident had been replicated with a similar model in perfect condition.

He believed the problem with the tailgate occurred when a stone became jammed in the trailer mechanism.

PJ Claffey, a manager with the HSA, said the authority had taken Mr Hayes’ expert report and had been working with the trailer manufacturer.

Mr Claffey urged farmers with NC 300 trailers dating from 2006 and before to contact their suppliers.

“We’re trying to get the word out there to the farming community that these trailers have this defect,” he said.

After a verdict of death from extensive head injuries in a farm accident was returned, Offaly county coroner Brian Mahon said he hoped the evidence might save the lives of others working with similar machines.