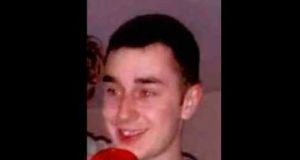 The inquest into the death of Martin O’Rourke was told he died of a gunshot wound to the head. Photograph: Garda.

No criminal charges will be brought in relation to the death of a 24-year-old man shot dead in a case of mistaken identity.

The Director of Public Prosecutions decision in relation to the death of Martin O’Rourke, who was shot dead in a lunchtime attack on Dublin’s Sheriff Street, was delivered at Dublin Coroner’s Court on Thursday.

His family were not present at the inquest but they had been made aware of the DPP’s decision, the court heard.

Coroner Dr Myra Cullinane was informed that the period for an appeal of the DPP’s decision had passed and she was now in a position to set a date for a full hearing into Mr O’Rourke’s death.

The father of three with an address at Focus Ireland on George’s Quay, Dublin, was shot dead in a case of mistaken identity as part of the bloody Kinahan Hutch feud.

The gunman fled the scene on a bicycle following the botched shooting.

Mr O’Rourke had recently returned to education and had begun to develop a relationship with his children, according to reports following his death.

Coroner Dr Myra Cullinane adjourned the inquest for a full hearing to take place on December 12th next.