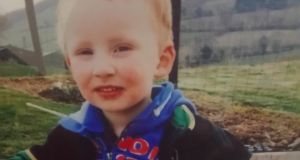 ‘Ronan was a magical little boy. He was full of life, love and was extremely affectionate,’ his parents said in a statement.

A three year old boy stepped into a bubbling jacuzzi and disappeared underwater at a hotel kids club, an inquest heard.

The footage showed the child exit the changing room and walk straight to the jacuzzi, Dublin Coroner’s Court heard. The little boy drowned as people walked close by as he couldn’t be seen in the churning water.

The child’s parents, Bridget and John Kennedy, called on the Government to introduce regulations for swimming pools immediately. The inquest heard that pools in Ireland are currently unregulated with regard to safety.

“Ronan was a magical little boy. He loved to play outside, go farming and he adored his food. He was full of life, love and was extremely affectionate. This cannot happen to any other child,” the Kennedy family said in a statement after the inquest.

“We ask that proper protocols be put in place regarding child safety within swimming pools.”

Garda James Heffernan of Youghal Garda Station reviewed CCTV footage taken at the hotel pool on July 13th 2015. He said Ronan walked out of the changing room directly to the water’s edge.

“He walked straight ahead from the door to the lip of the jacuzzi. He stepped into the seat of the jacuzzi and then he stepped directly into the middle of the jacuzzi. Unfortunately he is not visible for a number of minutes until he drifts out into the pool where he is found,” Gda Heffernan said.

Kids club staff were placing armbands on children next to the pool near the reception area at the time, the court heard.

“Persons were walking very close and he is just not visible unfortunately,” Gda Heffernan said.

Liam Moloney was at the pool with his son and grandson when he found the child floating underwater. “I saw this little lad, I thought he was swimming underwater at first.”

He noticed the child was not moving. “I touched his head and lifted him out of the pool,” Mr Moloney said. He raised the alarm.

The inquest heard from Irish Water Safety chief executive John Leech who said there were no formal regulations for swimming pools, either public or private, in Ireland. The pool at the Quality Hotel is privately owned by the hotel.

Mr Leech said pools were currently self-regulated, that there was no official register of swimming pools in Ireland and there was no obligation to follow IWS guidelines. He recommended that an inspectorate be established to formulate and implement regulation in relation to safety in order to minimise future drownings.

Mr Leech said IWS guidelines for children of Ronan’s age recommended a staff ratio of one to four.

A day after arriving at the hotel for a short break, the Kennedy family rushed to Cork University Hospital and later to Temple Street Children’s Hospital in Dublin, where Ronan was pronounced dead the following day.

The cause of death was hypoxic ischemic encephalopathy due to drowning, according to pathologist Dr Deirdre Devanney. The verdict was death by drowning.

Coroner Dr Myra Cullinane recommended that there be a dedicated lifeguard on duty at all times at swimming pools and the lifeguard should not be a person engaged in other supervisory duties.

The coroner is to contact the relevant Minister to recommend that a dedicated water safety inspectorate is required to formulate regulations and ensure their implementation.

The coroner commended the family’s decision to donate Ronan’s organs and thanked them on behalf of those who benefited.

“There is very little one can say to console you in this situation.. this is some small thing you can take great consolation from,” Dr Cullinane said.

“I hope no other family has to carry the pain that we do on a daily basis.

“We would suggest that a competent statutory body be appointed to impose, monitor and enforce these protocols. We believe that regulations have been promised and we would call upon the Government to deal with this promptly as another summer season is upon us and immediate changes need to be made,” the Kennedys said in their statement.