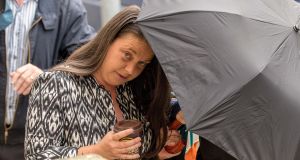 A Department of Social Welfare official has been found not guilty of coercion at Sligo Circuit Court. The complainant in the case Martha Rooney had alleged that the defendant had asked her for her oral sex in return for not being prosecuted for fraud. Photograph: James Connolly

A 48-year-old Department of Social Protection official has been found not guilty of coercion at Sligo Circuit Court.

Judge Keenan Johnson directed the jury to return a verdict of not guilty of coercion after ruling that the prosecution had not established that complainant had been intimidated.

He stressed that he was making no determination on the truthfulness of either the accused, Andrew Gilmartin of Drumfad, Grange Co Sligo or the complainant Martha Rooney of Colleary Drive, Sligo.

She had alleged that the defendant asked her for her oral sex in return for her not being prosecuted for fraud, during an interview at the social welfare offices in Sligo on April 9th 2014.

Ms Rooney wept as Judge Johnson delivered his ruling. Mr Gilmartin said he would be making no comment as he left the courthouse.

He was charged with intimidating Ms Rooney with a view to compelling her to do an act which she had a lawful right to abstain from doing.

Judge Johnson told the jury that the prosecution had to prove that there was intimidation of the accused by Andrew Gilmartin.

“I am satisfied that she was distressed and upset but there is no evidence that she was frightened or overawed,” said the judge, who made his ruling following an application by defence counsel Rory Staines. He pointed out that Ms Rooney had the presence of mind to unlock the interview room door, and to tell Mr Gilmartin that she had taped the interview, even though she had not. He said these were “hardly the actions of a person who was frightened or overawed”.

Ms Rooney had told the court that she attended the social welfare offices after getting a letter from the authorities about the fact that she had been working while claiming lone parent’s allowance.

She said that the accused had become angry after she admitted that she was also attending the National Learning Network , had asked her what she would do for him, and had said: “Here’s what’s going to happen- you are going to give me a b… j...”. The defendant who admitted using bad language and being “unprofessional” denied that he said this.

Judge Johnson said that given Ms Rooney’s evidence that she had been “economical with the truth” when filling up her lone parent’s allowance form , and given the absence of corroboration, a jury could not but have a reasonable doubt and would therefore have to return a not guilty verdict.

“In making that determination I want to make it abundantly clear that I am not making any findings in relation to the veracity of either the complainant Ms Rooney or the accused Mr Gilmartin,” said Judge Johnson “ I am merely undertaking my judicial function which is to interpret the law”.

The judge said he was “not for one moment condoning the alleged actions of Mr Gilmartin”.

If Ms Rooney’s evidence was true, and he was making no determination on this, “then it is fair to say that the alleged actions of Mr Gilmartin were reprehensible , and an affront to decency and civilized society, however that categorization doesn’t necessarily make his alleged action a criminal offence”.

The judge added that there had been other avenues open to Ms Rooney who could have made complaint to the department but had not.

Judge Johnson said she had instructed her solicitors to make a claim for damages and had acknowledged that the letter of claim was incorrect in alleging that Mr Gilmartin had falsely imprisoned and sexually assaulted her.

Ms Rooney denied in court that she had ever made such allegations but the judge commented that it would be most unusual for a solicitor “to do a solo run and send a letter that conflicted with the instructions given by the client”.

The judge said that the accused had accepted he used bad language which showed a serious lack of judgement on his part. “It would appear to me that the current case has its origins in the failure of Mr Gilmartin to accord the respect to Ms Rooney that she deserved as a client of the Department of Social Protection”, added Judge Johnson.

He called for changes “as a matter of urgency” in how interviews are conducted in the department saying it was “no longer feasible or acceptable in this day and age” to have the doors of interview rooms locked, especially during interviews involving different genders. Where no CCTV cameras were present this left “both the interviewer and the interviewee vulnerable to false accusations”.

He said the case had been a source of stress for both parties and it was clear to him “they are both inherently decent people”.

Ms Rooney deserved great credit for having gone back to education and Mr Gilmartin had an unblemished record with the department for 27 years.