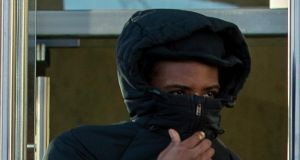 A schoolboy who violently attacked and robbed an elderly delivery man has been given a four-year suspended sentence.

Defence barrister Cathal McGreal BL described Jabari Crichlow’s crime as “a disgraceful act” and said the teenager (19) does not deny that fact.

“It is not lost on him that what he did was an appalling act of violence on a defenceless man who was trying to earn a bit of money after his retirement,” Mr McGreal defending told Judge Melanie Greally.

The victim, a retired 66-year-old man, was delivering food to a Dublin housing estate when he was attacked by Crichlow and his then 16-year-old accomplice.

A victim impact statement was read out stating that the man had been out of work for over a month, which cost him over €1,000 in lost income.

Dublin Circuit Criminal Court heard the man had suffered a broken nose, concussion and chipped teeth and that although his physical injuries had since cleared, he still gets headaches from stress brought about by the attack.

The man said he could not continue to work as he was afraid of a similar attack, and that he still gets nervous passing groups of people and cannot stay out after dark.

Judge Greally had adjourned the case after hearing evidence in November 2018 and placed Crichlow on a 12-month probation bond.

She ordered a report from the Probation Service and said he must engage with the service and not commit further crimes. The judge said she would suspend a sentence on the next date if there was a favourable probation report.

Judge Greally said it was a very violent offence and added that had Crichlow been an adult at the time, he would “undoubtedly get a prison sentence”.

The judge adjourned the case a second time last November after she said she would give the youth another opportunity having considered an unfavourable probation report.

On Monday Judge Greally noted from the latest probation report that Crichlow had not come “to any significant attention” and was now engaged with the Probation Service.

She noted that he had re-established a good relationship with his supportive mother. She suspended a four-year sentence for four years on strict conditions including that Crichlow “cease all association with negative peers” and carry out 240 hours community service within 12 months.