Twenty-three-year-old could have killed himself and property-owners if ATM had exploded, court heard 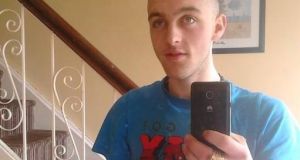 Evan Stubbins (23) from Church Road, Croom, Co Limerick, was charged with causing criminal damage to an AIB ATM and with attempting to steal its contents at the Maxol Garage, Carr’s Hill, Carrigaline, Co Cork, on August 2nd, 2020. Photograph from Facebook

A 23-year-old man who could have killed himself and property owners who lived near a petrol station in Co Cork when he tried to blow up an ATM has pleaded guilty to charges of criminal damage and attempted robbery of the contents of the machine.

Mr Stubbins was remanded in custody until his sentencing hearing on November 18th.

At his bail hearing in Cork District Court in August it was claimed that Stubbins was caught red-handed by two gardaí who noticed suspicious activity at the ATM on the main Cork to Carrigaline Road after 2am on August 2nd.

Gardaí approached him and he tried to open the door of a VW Passat fitted with false number plates. Following a brief struggle gardaí were able to stop him from getting away.

In the car gardaí found a con(concrete) saw, a large crowbar and a blow torch attached to two cylinders of gas and air which Mr Stubbins had allegedly planned to use to blow out the ATM from the wall.

“The garage was closed but the tanks there contain 30,000 litres of petrol and diesel and there is a house nearby. According to experts, if he had succeeded in doing what he planned, which would have involved mixing the gas and the air, he would have caused a huge explosion,” Garda O’Leary said. He added, “It would have had catastrophic consequences for both property and life, including his own – he could potentially have killed himself if he had followed through on what he was planning to do.”

Garda O’Leary said that he believed that Stubbins had “a fascination with explosions” and was a risk to both himself and to the community.

Mr Stubbins said he promised not to commit any offences if granted bail.

“I understand – if I tried to replicate something like last night, the gardai would be at my door within a hour because it’s a serious offence, very serious, it’s not something that happens too often – no way, 100pc, am I going to commit another crime if I get bail,” he told the court.

Mr Stubbins was refused bail at that juncture, but a successful application was lodged in the High Court. However, he was not in a position to take up his bail.

He will appear before Judge Seán Ó Donnabháin for sentencing later this month.