Man found with 230 buckets of Daz goes on trial 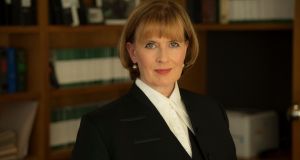 A man has gone on trial before Judge Karen O’Connor (pictured) accused of the unlawful application and possession of trademarks of well-known washing powder brands Persil, Ariel, Fairy, Daz and Bold.

A man has gone on trial accused of the unlawful application and possession of trademarks of well-known washing powder brands Persil, Ariel, Fairy, Daz and Bold.

David Galloway (54) is alleged to have been trading in these goods “to a significant degree”.

Mr Galloway, of Sundrive Road, Crumlin, Dublin has pleaded not guilty at Dublin Circuit Criminal Court to seven charges of unlawfully applying a trademark to buckets and 14 charges of possession of buckets, labels and boxes bearing a trademark.

The majority of the offences are alleged to have occurred at a premises in Greenogue Business Park, Rathcoole on June 7th, 2014.

Dominic McGinn SC, prosecuting, told the jury, in opening the trial, that the case arose from a garda search of a “relatively large” commercial premises at the Greenogue Business Park.

He said gardaí found buckets variously labelled with well-known brand names and a large amount of white powder which appeared to be washing powder. He said there were also labels bearing the trademarked names ready to be attached to buckets.

The trial is expected to run for five weeks before Judge Karen O’Connor and a jury.

The court heard the prosecution case would be that Mr Galloway was responsible for the commercial premises and was trading in these goods “to a significant degree.” He said there would also be evidence in relation to another unit allegedly previously used by Mr Galloway.

He told the jury they would hear evidence about the trademarks and how they are protected. He said the law stated that you cannot use trademarks unless you have the correct authorisation.

He said that if a person applies a trademark name to some sort of material, in this case a bucket, without the correct authorisation that is an offence. This constitutes the first seven charges.

Counsel said that the commercial aspect was what was important in the prosecution case, that the offences had to be carried out with view to a gain for himself or another or causing a loss to another.

He said the prosecution case was that the alleged offences were carried out by Mr Galloway with a view to a gain for himself.