Jail for Vietnamese men ‘smuggled into Ireland to grow cannabis’ 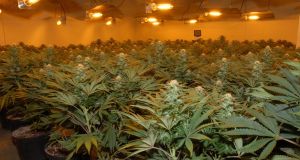 Ngog Toan Vu (54) and Thang Nguen Van (46) each pleaded guilty to one count of cultivating cannabis without a licence at a warehouse unit in in Dublin. File Photograph: Garda/PA Wire

Two Vietnamese men who claim they were smuggled into Ireland to work in a cannabis growhouse containing nearly €1.8 million of drugs have been jailed for two-and-a-half years.

Ngog Toan Vu (54) and Thang Nguen Van (46) each pleaded guilty to one count of cultivating cannabis without a licence at a warehouse unit in Ballymount Drive in Dublin on May 10th last year.

Their sentence was adjourned last December to allow for investigations to continue as to whether they were the victims of human traffickers.

On Monday, James Dwyer BL, prosecuting, told the court the investigation had concluded that neither man was a victim of human trafficking.

However, Judge Martin Nolan said he considered both Vu and Van to be “desperate men”.

“They seem to have had no rights and they were preyed upon, probably by their own,” the judge said. “Their moral culpability is low. They had little or no option but to participate in this crime.”

Judge Nolan said he had no doubt both men knew what they were doing was wrong and he noted the value of the drugs was extremely high. He handed down a two-and-a-half year sentence and backdated it to last May, when both men were taken into custody.

Because both men are illegal, they will most likely be deported upon their release from custody.

The court heard that gardaí ­ searched the warehouse in May last year following a confidential tip-off.

Upon arrival, they found a “highly sophisticated” operation, involving six grow rooms filled with 1469 cannabis plants, with lighting, heating and ventilation systems in place. There was also a 31kg vat of harvested cannabis.

The total street value of the drugs seized was €1.795 million, the court heard.

Gardai also discovered a small living area in the warehouse, with two beds, a TV and laptops. Vu and Van were arrested at the scene.

In a series of interviews with gardaí, they both admitted to cultivating cannabis in the growhouse. They said they were paid €400 fortnightly for the work.

Vu said he had paid a Chinese man to travel to Ireland from Vietnam in a shipping container. He said he was taken straight to the growhouse upon his arrival in the country and had been living in the warehouse for seven weeks.

He said he was forced to leave Vietnam after his barber shop was compulsorily purchased by a criminal gang. He spent his life savings of $40,000 to pay for the trip to Ireland, where he said he thought he was going to be working on a farm.

Vu’s documentation was taken from him upon his arrival and he told gardaí ­ he felt he could not leave, and that the warehouse was being monitored.

He has no previous convictions.

Van told gardaí he had only been in the country for three days. He previously lived illegally in the UK and he has a number of convictions there for theft, shoplifting, driving without a licence and failing to present documentation to immigration services.

Van told gardaí ­ he was a chef and thought he would be working in a kitchen when he arrived in Ireland. He said he was “coughing to death” in the environment of the growhouse.

Van has a gambling debt in Vietnam of about €7,000 and a partner and a six-year-old son still living there, the court heard.

Garda Dempsey said no documentation was found for either of the men, which was often the case in human trafficking scenarios. Neither man could speak English and the court proceedings were translated to them.

Both men co-operated with gardaí ­ in an attempt to identify the alleged human traffickers.