Community service for developer who owes €1m to Revenue 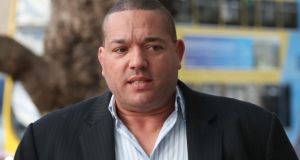 A property developer who owed more than €1 million in unpaid taxes and penalties has received 240 hours of community service.

Judge Sinéad Ní Chúlacháin sentenced Jordan to 240 hours of community service in lieu of 18 months’ imprisonment for one count of submitting an incorrect tax return.

She also sentenced him to 18 months’ imprisonment for one count of submitting an incorrect invoice, but suspended the entirety of the sentence for a period of three years on condition that he keep the peace and be of good behaviour, and that he comply with the arrangement he has made with Revenue.

At an earlier sentence hearing, Séamus Clarke SC, defending, handed in a signed agreement between his client and Revenue that Jordan will pay around €5,000 a month for 113 months. Jordan has already made payments totalling €57,500.

The court heard that Jordan came to the attention of a special Revenue unit looking for high-wealth individuals due to him having a large property portfolio in the 2000s.

Former Revenue officer Elizabeth Keane testified that Jordan was required to pay capital gains tax on the sale of five properties which he sold for a total value of €1,960,500 between 2004 and 2010, and that he failed to do so.

She said the tax returns he submitted during that period were incorrect due to the failure to pay capital gains tax. He also submitted four incorrect invoices which lowered his VAT liability.

Judge Ní Chúlacháin noted that Jordan had failed to pay tax on rental income and had waived a tax exemption on this income which he was entitled to in order to offset it elsewhere. She said he made a number of false claims for income tax relief for properties he owned. This relief was ineligible because the properties were not registered to the Private Residential Tenancies Board.

Jordan has one previous conviction from 2017 for failure to file an income tax return.

Mr Clarke said Jordan ran a carpet business, and that people would lose their jobs if he was given a custodial sentence.

Judge Ní Chúlacháin said she had regard not only for punishment while considering the sentence, but also deterrence.