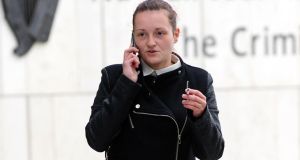 A bride-to-be has received a suspended sentence for stealing over €15,000 of money set for destruction at the Central Bank because she worried about paying for her wedding.

The Romanian national pleaded guilty to stealing a further €6,010 from the firm on September 19th, 2014. She has no previous convictions.

Judge Martin Nolan suspended a sentence of two and a half years after noting that she is unlikely to re-offend.

He said that Birtas had “succumbed to temptation” as she knew the money was to be destroyed and that there would be no injured parties involved. He said he could treat it as a one-off offence.

The manager counted out the money bundles to check them against a ledger and discovered a total of €15,530 missing over the two days.

Det Gda Weir told Tom Neville BL, prosecuting, that Birtas said she was getting married the next year and didn’t think she would have enough money saved from her €10 per hour job.

Gardaí froze Birtas’s current and savings accounts, where she had deposited €6,005 of the stolen money. They found another €7,840 in her home after she had directed them to its location.

Birtas, who has a Masters degree in banking and finance from Romania, told gardaí she had never done anything like this before and “didn’t think” about the consequences.

Det Gda Weir said Birtas apologised during garda interview. He added that all of the stolen cash will be returned to the Central Bank.

He agreed with Aoife McMahon BL, defending, that Birtas’ former employer had accepted her resignation instead of dismissing her after the incident.

The garda further agreed that it was “not uncommon for there to be cash discrepancies” in money going to the Central Bank.

Ms McMahon submitted to Judge Martin Nolan that her client “doesn’t seek to shy away from the crime” and hoped her conviction wouldn’t stand in her way to securing jobs in the future.