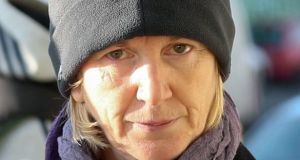 Offaly doctor Bernadette Scully who has been cleared of the manslaughter of her profoundly disabled daughter by giving her too much sedative. Photogograph: Collins Courts.

An Offaly doctor has been cleared of the manslaughter of her profoundly disabled daughter by giving her too much sedative.

The GP was charged with unlawfully killing 11-year-old Emily Barut at their home at Emvale, Bachelor’s Walk, Tullamore. It’s alleged that she killed her by an act of gross negligence involving the administration of an excessive quantity of chloral hydrate on Saturday September 15th, 2012.

The 58-year-old had pleaded not guilty and went on trial at the Central Criminal Court two weeks ago.

Emily had microcephaly, severe epilepsy and couldn’t speak or move. She’d been in pain for the last eight days of her life, having had a medical procedure to replace the tube into her stomach, through which she received fluids and medication.

Emily died and Ms Scully tried to take her own life twice, the second time by overdosing on medication for which she had written a prescription in her elderly mother’s name. She had sent her partner to fill the prescription, its purpose unknown to him. He found Emily dead and Ms Scully unconscious that evening.

Laboratory tests showed that Emily’s blood contained 10 times the therapeutic levels of the chloral hydrate’s metabolite and a post-mortem exam found she had died from chloral hydrate intoxication.

The State Pathologist said that, potentially, those levels were fatal.

However, Professor Marie Cassidy said she had suffered a seizure six to eight hours before her death and that any of her illnesses could have contributed. She also said that she had been at risk of a potentially fatal seizure at any time.

The State argued that the chloral hydrate was a substantial cause of death. It did not have to prove it to be the only cause.

Tara Burns SC, prosecuting, said it wasn’t in doubt that Ms Scully loved her daughter very much and cared for her to the highest level.

“What this case is about is the events of a specific day when chloral hydrate was administered,” she said, noting the levels Ms Scully had said she had given.

“Any reasonable person in the situation Ms Scully was in, a doctor, would have realised that administering that level of chloral hydrate carried a high degree of risk of causing a substantial risk of injury to her daughter,” she said, outlining the prosecution case.

Ms Scully’s legal team argued that there was a clear indication in the post-mortem results of the possibility of a terminal seizure and Kenneth Fogarty SC said that the traumatic event that had led to the maladministration alleged was indeed a massive seizure after 11 o’clock.

He said it was clear that the only reason a person would administer more chloral hydrate was if the initial dose was not achieving the desired result. He pointed out that other anticonvulsant medications had life-threatening effects on Emily.

He also noted that nobody had a formula to equate the amount of chloral hydrate taken into a body with the amount of its metabolite that would be found in the blood.

Mr Justice Patrick McCarthy told the jury that it had to be satisfied that the accused had failed to observe the ordinary and necessary care expected of her to the point that she was negligent in a very high degree.

That negligence must have brought a very high degree of risk of substantial personal injury to others.

He said it did not matter what the accused woman’s state of mind was.

He said that, in the case of a doctor, she could follow general and approved medical practice, unless obviously defective. She could depart from that practice unless it involved something no similarly qualified expert exercising care would do.

He reminded the jury of the evidence of a retired consultant paediatrician, who was also a member of the Advisory Committee for Human Medicines, the national body that decides if drugs are safe and effective.

Dr Kevin Connolly had been asked about the high doses of chloral hydrate Ms Scully said she had given her daughter in a short timeframe.He referred to people, who metabolise drugs at different rates to most people in clinical trials.

“If Emily was one of those outliers, and it had been found she required more frequent or higher doses, then this was appropriate,” he said.

He explained that Emily’s body might have been able to handle an increasing dose up to a certain point but then became overwhelmed.

“That can happen, that the body can only take so much and then it’s too much,” he said.

The seven women and five men began considering their verdict on Thursday morning. They returned to court with their unanimous verdict of not guilty following four hours and two minutes of deliberations.

Gasps were heard in court following the announcement by the registrar of the verdict. Bernadette Scully acknowledged her family members, some of whom began weeping.

The judge thanked the jury and discharged the members before moving onto other cases. Ms Scully and her family embraced each other before leaving the court, outside which wellwishers gathered to congratulate her.