Gary Donnelly says he should never have been charged; Dáil TDs offer support in court 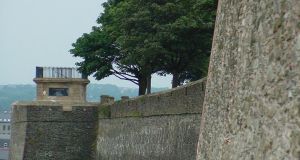 Independent councillor Gary Donnelly was one of three men sentenced last November over the painting of political slogans on the walls. File photograph of Derry walls.

Dissident Republican Gary Donnelly has won an appeal against a six-month jail sentence in Derry Crown Court after being convicted of causing criminal damages to the city’s walls.

The Independent councillor was one of three men sentenced last November over the painting of political slogans on the walls.

Donnelly (43) from Iniscairn Road in the Creggan area of the city, was elected to represent the Moor ward in last May’s local government elections. If the original sentence had been upheld, he would have been disqualified from being a public representative for five years.

However at Tuesday’s appeal hearing against the sentence only, Judge Philip Babington replaced the six-month jail sentence with a conditional discharge for twelve months.

He also ordered Donnelly and his co-appellants, William Brogan (51) from Carmhill and Terry Porter (56) from Racecourse to pay compensation of £2,600 (€3,300) for the cost of repairs to the walls. Judge Babington said half of the money is to be paid to the government body responsible for the walls, the Northern Ireland Environment Agency and half is to paid to the local charity Foyle Search And Rescue.

There was cheering and clapping in a packed public gallery after Judge Babington announced his decision. Among those in the courtroom were Fianna Fáil TD Eamon O’Cuiv and Independent TDs Clare Daly, Maureen O’Sullivan and Thomas Pringle. Also in the public gallery were local councillors from both sides of the border in the North-West.

Judge Babington said the actions of the three appellants in causing criminal damage to the walls constituted a serious offence.

“The walls in this city belong to all the people who live here and are responsible for attracting many thousands of people who bring with them benefits to this city. The district judge had hoped that money would have been available to pay for the costs of repairs. This court is pleased to see that this has now happened”, he said.

Speaking after he was given a conditional discharge, Donnelly said he was pleased the prosecution process was over. “We should never have been charged in the first place. It was a complete farce and I now look forward to representing the voters whom I have been elected to represent in the Moor Ward, ”he said.

Mr O’Cuiv said he was pleased at the outcome . “ I came up here today because I was concerned about the original judgment, the consequences of which would have meant Gary Donnelly would have lost his seat and his voters would have been disenfranchised”, he said.

Ms O’Sullivan described the judge’s sentence as a fair result. “The original sentence was not fair in relation to the crime and I am speaking as someone who does not like historical monuments to be defaced. I am in favour of peaceful political protest and if the original sentence had been upheld Gary Donnelly would have gone to jail and the biggest losers would have been his constituents”, she said.