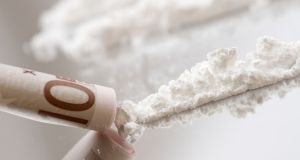 The decline in the drug trade has been attributed to the collapse of disposable income to fund recreational drug-taking since the recession. Photograph: iStockphoto

The number of people being convicted of commercial-scale drug dealing has almost halved in recent years.

The lower conviction rate has emerged after years of decline in the drugs trade as the disposable incomes that fuel so-called recreational drug-taking have collapsed in the recession.

And Garda officers say that while the economy is recovering again, it will be several years before conviction rates increase again because most cases take several years to come to court and a trial and sentencing completed.

New information on drug-crime sentencing obtained by Clare Daly TD shows that in 2011 and 2012 the number of drug dealers convicted for possessing commercial quantities of drugs for sale or supply exceeded 200.

In 2011 there were 205 convictions and in 2012 there were 223. In both years, many of the cases from the end of the economic boom were still being finalised.

However, in 2013, as the backlog was cleared, the sharp declined in the drugs trade brought about by recession began to become clear in the courts.

There were 181 convictions for commercial-scale drug dealing in 2013, down 19 per cent on the previous year.

Last year the numbers were back up again, to 125. However, Garda sources said it was too early to say if that increase reflected a recovery in the drugs trade as the economy stabilises and improves.

Commercial-scale drug dealing is defined in law as possession of illicit drugs valued at €12,500 or higher for sale or supply.

Away from the new sentencing data, the Garda’s crime figures show drug crime has fallen by 35 per cent since the cocaine boom went bang along with the wider economy in 2008.

The majority of those who consume drugs are so-called recreational users, smoking cannabis or using stimulant drugs such as cocaine and ecstasy as part of their “night life”.

And because the majority of those drug users are not chronic addicts, they stop or reduce their drug-taking when their incomes don’t allow it.

It means the drugs trade contracts in times of recession, with fewer drug arrests and criminal charges and fewer drug seizures, especially multimillion euro shipments, as most drugs gangs struggle to raise the money to buy in bulk.

However, while the reduced spending power of drug users is regarded as a key factor in the contracting of the drugs trade, many Garda members believe reductions of manpower in the force, as well as spending on overtime, has had an impact.

“We have had people in [Garda] Headquarters warning lately that if you don’t have the staff then the policing service is going to suffer,” said one source.

“A lot of these drugs operations involve surveillance and carrying out planned raids and stop-and-searches, which cost a lot of money.”

Another source said because surveillance and operations seeking out drug users and drug dealers did not affect the general public, and went unseen, they were often “easiest to drop”.

“Nobody even notices you have dropped them. But of course it means lower detection and few arrests and charges.”