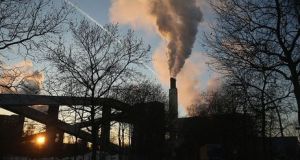 The Renewable Heat Incentive scheme was set up to encourage businesses and other non-domestic users to move from using fossil fuels to renewable heating systems. File photograph: Getty Images

Hundreds of Renewable Heat Incentive (RHI) boiler owners secured permission to challenge plans to publish their names at the High Court in Belfast on Friday.

A judge granted leave to seek a judicial review of outgoing Minister for the Economy Simon Hamilton’s decision to reveal a list of those participating in the botched scheme.

Mr Justice Deeny held that a group of boiler operators has established an arguable case that the move breaches privacy and data protection laws.

He said there remains uncertainty at this stage over whether names can be lawfully disclosed.

“It may well be that the Minister is perfectly entitled to publish the identities of these recipients, but it does seem to me a matter that justifies further investigation,” he said.

The judge also confirmed an interim injunction to stop identification of more than 500 members of the Renewable Heat Association of Northern Ireland remains in place.

With a full hearing now set to take place before the forthcoming Assembly elections, lawyers are expected to return to court next week to establish whether any companies on the list are also covered by the temporary ban.

Mr Hamilton was due to publish the names of users of the so-called “cash for ash” scheme on Wednesday.

Lawyers launched legal action against the move, claiming it would create a media “feeding frenzy” and threaten the reputation of individuals who have done nothing wrong.

The RHI scheme was set up to encourage businesses and other non-domestic users to move from using fossil fuels to renewable heating systems.

The scheme has been surrounded by controversy since it emerged that users could legitimately earn more cash by burning more fuel.

The flawed scheme, which could end up costing the public purse up to £490 million, was a major factor behind the Stormont Executive’s recent collapse and calling of snap elections.

A public inquiry to be chaired by retired appeal court judge Sir Patrick Coghlin has been announced.

Judicial review proceedings against the plans to name recipients were issued by Michael Doran, chairman of the association.

Mr Doran does not have a boiler and receives no subsidies under the scheme. But he is representing hundreds of non-domestic operators seeking an order quashing plans to publish their details.

The barrister argued that those on the non-domestic scheme have a legitimate expectation that their privacy would be protected.

Publication would deflect criticism from officials and political representatives onto many individual RHI recipients who have been operating the boilers legitimately, it was claimed.

Counsel for the department countered that public interest issues outweigh any privacy entitlements.