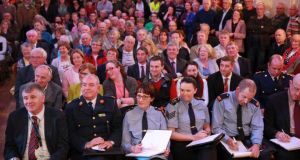 Up to 1,500 people gathered at a meeting in Thurles on Thursday night to call for urgent reforms of bail laws to help tackle a growing “epidemic” of rural crime.

The "save our community" campaign meeting heard dozens of personal accounts of robberies from farmers, small business owners and older people, along with demands for greater action by authorities.

Senior gardaí were present for the meeting, including Assistant Commissioner Jack Nolan and Chief Supt Catherine Kehoe for the Tipperary division.

The gathering heard calls for a series of tough measures to help combat the problem, such as electronic tagging of convicted criminals, stronger trespass laws and greater Garda resources.

Francis Burke, a Rahelty-based farmer who was burgled recently, said the country’s lenient bail laws meant many criminals had little fear of the law and continued to engage in crime.

“We need our bail laws to be changed. You have people with hundreds of convictions out committing crime. If we adjusted that, it would make a big difference.”

The packed meeting at the Anner Hotel also heard calls for extra resources to boost the Garda’s ability to combat crime and gather intelligence over the activities of local gangs.

Micheal Clohessy, a garage owner in Littleton, said he had been the victim of up to 15 break-ins over the the past five years.

He produced a sheaf of standard-issue “victim of crime“ letters he received from the Garda over the period.

“I’d much prefer to get a letter giving me some idea of what’s happening with these cases… While the guards do great work, they are completely under-resourced.”

A number of speakers said shrinking Garda numbers and station closures had left communities exposed and without adequate alternative policing.

Shop-owner John Tully, who has been burgled on a number of occasions, said extra resources were key to targeting gangs.

“We need to forget about cars for gardaí. They need high-powered vehicles, like they have in the North. These guys come in Jeeps, not Morris Minors.

“Gardaí need to be networking in local communities, collecting intelligence. We also need to start looking at putting Garda cameras on motorways, toll bridges or in camera vans so they can police the road network.”

Assistant Commissioner Jack Nolan said the depth of fear over crime was worrying, but said the Garda was making significant inroads..

He said about 14,000 people have been arrested and 9,000 charged as part of “Operation Fiacla”, which targets gangs involved in burglaries.

Ms Kehoe also said the force was targeting criminals in the local area, including those in contact with other networks from outside the area.

The issue of rural crime has come into sharp focus with the recent jailing of seven men for an aggravated burglary on the home of Mark and Emma Corcoran, in Killenaule, Co Tipperary, in November 2013.

It follows the death of 62-year-old John O’Donoghue, who suffered a heart attack after discovering intruders at his home in Doon, Co Limerick, in September.

The Government has said it is responding to the issue through fresh Garda recruitment, new legislation to allow for consecutive sentencing and extra resources for specialist anti-burglary units.

In addition, Minister for Justice Frances Fitzgerald is steering through the Criminal Justice (Burglary of Dwellings) Bill, targeted at repeat burglars who have previous convictions and are charged with multiple offences of burglary.

These provisions, she said recently, would strengthen the basis for refusing bail and provide tougher sentences for repeat offenders.