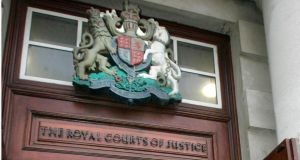 The British government has “washed its hands” of an obligation to oversee an inquiry into the shooting of an IRA man more than 40 years ago, the Northern Ireland High Court has heard. File photograph: Dara Mac Dónaill/The Irish Times

The British government has “washed its hands” of an obligation to oversee an inquiry into the British Army shooting of an IRA man more than 40 years ago, the Northern Ireland High Court heard today.

In a test case which could have major implications for dealing with the North’s troubled past, it was claimed that responsibility for examining the alleged murder of Stan Carberry lies with Westminster rather than the Stormont Executive.

Mr Carberry was gunned down aged 34 in disputed circumstances on west Belfast’s Falls Road in November 1972. Military witnesses later told an inquest they fired back after gunfire came from the vehicle he was in. But others have claimed Carberry, a member of the IRA’s Belfast Brigade, was shot in the back when he had his hands raised.

The father-of-six’s family believe the shooting was unjustified and amounted to murder. They say the now-defunct Historical Enquiries Team did not carry out a proper review of the killing, failing to interview and take evidence from soldiers present.

In 2013, a watchdog report by HM Inspectorate of Constabulary found the HET treated cases with state involvement less rigorously than others.

Mr Carberry’s son, Stan jnr, was in court today as his lawyers launched judicial review proceedings in a bid to compel the British government to fully investigate the shooting.

They argued there is a human rights obligation under European law for such an examination.

Frank O’Donoghue QC said: “The secretary of state and the British government are washing their hands of their investigative obligation by delegating responsibility to the [Northern Ireland] Assembly, who are effectively unable to give any assurance to Mr Carberry.”

The court heard new statements have emerged from two witnesses to the shooting. But Peter Coll QC, for the secretary of state, contended a HET review does not impose an automatic obligation on the state under the European Convention on Human Rights.

With judgment awaited in an unrelated Supreme Court challenge which is expected to impact on the case, Mr Justice Treacy decided to adjourn proceedings until October.

Outside court Mr Carberry insisted he is seeking justice on behalf of his elderly mother.

The west Belfast man said: “My father was murdered and I want the state to acknowledge that, not to run away from it.

“My father had the right to live, not to be murdered with his arms in the air.”

Mr Carberry has been backed in his legal fight by campaign group Relatives for Justice.

Its director, Mark Thompson, predicted: “This is going to be a test case where the court is being asked to make a legal finding on who has responsibility for investigating these state killings.”

Solicitor Paul Pierce of KRW Law, representing Mr Carberry, added the case touches on all contentious killings throughout the conflict.

“The UK government cannot continue to absolve itself of responsibility for these deaths by transferring responsibility to a locally devolved assembly.”