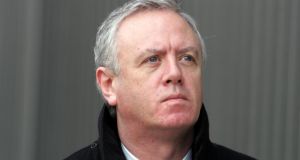 The Law Reform Commission has recommended that a loophole in the law that enables killers such as Eamonn Lillis (above) to potentially benefit from their crimes should be closed with proposed new legislation. Photograph: The Irish Times

A loophole in the law that allows killers such as Eamonn Lillis to potentially benefit from their crimes should be closed with proposed new legislation, the Law Reform Commission has recommended.

In a report to be released on Friday, the commission recommends enactment of new legislation to prevent a person guilty of murder, attempted murder or manslaughter from obtaining any benefit from a victim, including from insurance policies, pensions or the family home.

There was public controversy when it became clear in 2011 that Lillis could gain control of the home he shared with his wife Celine Cawley, in Howth, Co Dublin.

Lillis had been jailed for killing Ms Cawley at their home, Rowan Hill on Windgate Road, Howth, in 2008. The manslaughter conviction, in 2010, resulted in a sentence of six years and 11 months in prison. With remission, he was released in April this year.

During his imprisonment, Ms Cawley’s family took legal action to prevent him from taking control of property he had held jointly with his wife, including their home.

As part of a joint tenancy, when one of the joint owners dies, the entire property automatically passes to the surviving joint owner, who becomes full owner. This right of survivorship applies even where the surviving co-owner has killed his or her spouse.

In the Lillis case, Ms Justice Mary Laffoy ruled the interest Ms Cawley held in the joint property should be held in trust for her daughter. The court modified the right of survivorship to prevent Lillis from acquiring Ms Cawley’s share of the jointly owned property. She also recommended the law be reviewed.

Speaking to The Irish Times, Judge Marie Baker, a commissioner of the Law Reform Commission, said in the Lillis case, the offender conceded the right to survivorship rule could not apply, and this was something Ms Justice Laffoy could work with.

But Lillis did not concede that the court could look at his half of the property.