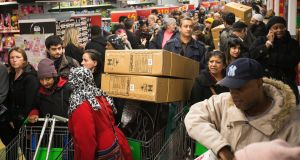 Customers push loaded shopping carts through crowded aisles as they look for bargains during a Black Friday discount sale inside an Asda supermarket in Wembley, London. Photograph: Simon Dawson/Bloomberg

A woman was taken to hospital with a suspected broken arm after a stampede at a shopping centre over cut-price televisions.

There were also claims that a heavily pregnant woman was pushed and shoved and pensioners were knocked to the ground by frantic shoppers battling to get their hands on Christmas deals at the Asda store in west Belfast.

A spokesman for the Northern Ireland Ambulance Service confirmed paramedics were called to the Westwood Centre at about 8.30am and took a woman with an arm injury to the nearby Royal Victoria Hospital for treatment.

Chaotic scenes also erupted at a number of other Asda outlets across the region.

Hundreds of customers who had queued from the early hours of this morning became irate after being told the limited number of discounted televisions and tablet computers had sold out within minutes.

One woman who was caught up in the mayhem in west Belfast described the scenes as frightening.

“It was just a free-for-all. It was frightening,” she said. “People were getting trailed to the ground. People were arguing with people. Two of my friends were injured.”

The woman claimed one friend was kicked in the stomach by a man who tried to grab a TV out of her hand.

“The other one, who is disabled, was actually kicked to the ground and trampled on and now has a broken arm and is waiting to hear if she is going to need surgery next week,” she said.

TVs were reduced from £179 to £99 as part of Asda’s ‘Black Friday’ special offers that were advertised throughout the UK.

People formed queues from about 1am for the deals, which started at 8am.

In the Westwood outlet in Northern Ireland there were just 24 of the 32-inch television sets on sale at the reduced prices.

Another customer said tensions at the Asda Living shop in the Citygate Shopping Centre in north Belfast almost spilled over into violence.

He said staff were verbally abused by outraged customers who were told the shop had not received any of the discounted items.

“People were just irate. I honestly thought it was going to be a digging match (fight),” he said.

In a statement Asda described the response to its first Black Friday deal as phenomenal.

A spokeswoman said: “This is the first time Black Friday has been done on this scale in stores across the UK and our customers were eager to take advantage of the great offers available to them. We planned for high demand and the half a million Black Friday products on offer to our customers have been selling quickly since 8am.

“Throughout the event, the safety of our customers is of vital importance and to ensure our stores can cope with the extra footfall we have full security teams in our stores and extra colleagues to help assist customers in the aisles.”