There’s more than one way to protect your home

Having an alarm system installed will ensure greater peace of mind but don’t neglect the strengthening of doors, locks, windows and glazing 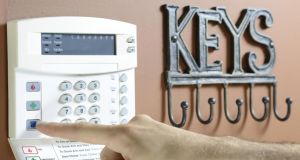 Alarm systems are common now in Ireland but many neglect the fundamentals of physical security.

They say the best way to learn is through experience and this is certainly true when it comes to sensible shopping. When I first arrived in Dublin in 1998 as a student, it took a few hard knocks to realise that: (1) impulse buys are a bad idea and (2), salespeople are not always shining beacons of honesty.

After some bad experiences, I now consider myself a hardened consumer, immune to sales patter, resistant to rip-offs.

“No” is the first word out of my mouth when salespeople call. So when I bought Phonewatch’s new all-singing, all-dancing monitored house alarm on impulse from a young woman who called to the door, I worried afterwards that I had fallen back into my naive old ways and had made a rash decision I would regret.

I was relieved to find out though that the amount I paid on the doorstep did, in fact, represent a significant discount. The cost of our alarm, or “smart security system” as Phonewatch calls it, was €499, down from the usual €699.This stood up well when compared with alternatives on the market, with the price of other wireless-monitored alarms generally north of €550.

However, while the up-front cost represented a good deal, there was a sting in the tail: a monitoring and maintenance fee of €35 a month, which works out at €420 a year. This expense dwarfs the 15 per cent reduction we received on our house insurance premium for having an alarm fitted.

So what will Phonewatch do in return for this princely sum? Station-trained bodyguards about the perimeter of our property? Not quite, but if the alarm is activated, the company will phone us to check if everything is all right. If they can’t reach us, they will contact our designated keyholders, and the Garda if needed.

In some cases, it is possible to bring the monitoring cost down by switching to an alternative provider. Dublin security firm Securigard offers a very similar service to Phonewatch’s for an annual fee of €180 plus VAT. Peter O’Connor of Securigard says they can take over and maintain older Phonewatch alarms, but not the newer alarms installed in recent months, which rules out switching in my case. Securigard also offers a cheaper self-monitoring service, which is essentially an automated system that texts family members if the homeowner’s alarm is activated. The charge for this service is a one-off fee of €130.

When I rang Phonewatch to ask about the possibility of switching, I was told that no other monitoring companies can take over the type of alarm I purchased, which comes with a number of motion sensors with built-in cameras. These motion detectors are fitted throughout the downstairs of our house and are a little creepy, although you soon forget they are there.

According to Phonewatch, photographs will only be taken and transmitted to their alarm receiving centre if the alarm is set off, but the Big Brother vibes will be too much for some people. Our alarm went off once in the middle of the night, thankfully a false alarm. A Phonewatch staff member mentioned afterwards that they had photos of us moving about downstairs and could tell we weren’t burglars, which was reassuring and at the same time unsettling.

There are other issues. Once the system is switched on at night, the alarm will go off if anyone wanders back downstairs for a glass of water or a midnight snack and doesn’t manage to disarm it in time, which can be stressful in the dark when you are half asleep.

The alarm has several features that I really like, however. First off is the distinctive black bell-box mounted on the front of the house, which sets it apart from other alarms and hopefully acts as a greater deterrent to potential intruders.

Secondly, the control box of the alarm is tamper-proof and the electricity supply is monitored. It also comes with a monitored smoke alarm. My favourite element is the remote control, which allows you to arm and disarm the system and to activate a panic button function if necessary, while you are upstairs in bed.

All in all, I was enjoying a sounder night’s sleep and worrying less about the high break-in rate in our area. Until, that is, I spoke with security expert Ciarán O’Connell of Burglarybusters.ie, who explained that alarms are not a panacea.

He believes there is a massive lack of awareness in Ireland of the importance of the “physical security” of a home, which means the strength of its doors, locks, windows and glazing. “It’s a combination of physical security in conjunction with alarms that works best,” he says. “Alarms tell you there’s somebody inside. Surely we need to do something about keeping them out in the first place?”

So what measures should I take in order to up the security levels of our house?

“If you want to protect yourself, ideally your front door should have a steel frame,” he advises. The strength of a door depends on the strength of the frame. Most apartments and houses in continental Europe have steel frames, but in Ireland wooden frames are common, meaning that doors are much easier to kick in.

However, replacing our front door with a steel-framed security door is too steep for our budget – it would cost €2,000-€3,500 – so we are now considering a cheaper alternative: the Burglarybuster Nightlock Pull-Up Security Bar. It’s a snip at €49, can be installed on front or rear doors and makes it much more difficult for anyone to break in.

Also, the cylinders used in most locks in Ireland offer little resistance. Many burglars are able to disengage them in under 20 seconds. Fortunately, replacing lock cylinders is not a big job. “A lot of people can actually do this themselves,” says O’Connell. “It’s quite a simple application and relatively affordable, depending on which cylinder.”

He estimates that if all doors were fitted with more secure cylinders, Ireland’s burglary rate would fall overnight by 15-20 per cent. So in addition to a security bar on our front door, we have decided to replace the cylinder lock on the sliding door – these doors are particularly vulnerable to break-ins, apparently – at the back of the house, which should set us back less than €50.

In short, alarms aren’t everything. There are many low-cost ways of dramatically reducing the chances of a break-in. So what I have learned from this whole encounter with Phonewatch? Always do your research before signing a contract. And always wear pyjamas if your house is fitted with monitored cameras.