Rubik’s Cube: it’s been baffling folk for no less than 40 years

It's been four decades since Hungarian inventor and architect Erno Rubik created his best-selling toy cube.While the cube launched in 1974 in Budapest, Hungary it was initially not allowed to be sold outside of the Soviet Union. Video: Reuters 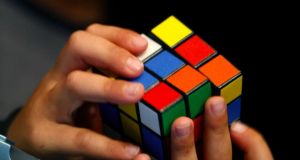 The exhibition Beyond Rubik’s Cube is “not about the cube. It’s about the intersection of engineering, that brilliant mechanism inside the cube; design, of course the colours of it, and mathematics - that 43 quintillion possibilities”. Photograph: Laszlo Balogh/Reuters

It’s been no less than four decades since Hungarian inventor and architect Erno Rubik created his best-selling toy cube.

To celebrate the anniversary, the 69-year-old has paired up with Liberty Science Center in Jersey City, New Jersey, to feature the many aspects of the toy puzzle in a special exhibition.

Titled Beyond Rubik’s Cube, the exhibit explores the humble beginnings of the cube, showing its first prototypes - made out of wood and rubber bands.

It also houses the world’s most expensive Rubik’s Cube ever made. Created by Diamond Cutters International, it is an 18 karat gold cube set with 1,360 jewels, including white diamonds, green emeralds, red rubies, blue and yellow sapphires and purple amethysts, estimated to be worth $2.5 million (€1.8 million).

Yesterday, a few days ahead of the exhibition’s public opening, Mr Rubik said that after spending most of his adult life with the cube, he sees it as his eldest child.

“If you have a family you have the family. And naturally, part of what your family is doing, you are loving it, you are criticising it and you try to modify. But it’s your family. So you can’t say you are not part of my family,” he said, referring to the many tests and alterations he had to make in order to perfect the cube.

While the cube launched in 1974 in Budapest, Hungary, it was initially not allowed to be sold outside of the Soviet Union, of which Hungary was part.

Since its international launch in 1980, about one in seven people have played with the famous puzzle.

It is one of the most popular puzzle toys in the world and, therefore, hard to exhibit, according to Mr Rubik, because of the already massive exposure it has had.

“Everybody has it at home. So it’s hard to show them something else, something different. But we were able to do that because the cube has so many different sides. Not only six that are in practice. And the cube has made lots of inspiration all around the world,” he said.

For the artistic-minded, a mural installation has visitors create specific cube patterns which can then be put on the wall to create a “cube painting”.

A robot can take over and solve your cube when it gets too hard, showing every step it takes on a monitor.

The ultimate goal is to use the Rubik’s Cube to show visitors that the boundaries between science and art are not clearly defined.

“So what this exhibit, if we have succeeded, what it will do is - you come in here and maybe you think of yourself as a mathematical person. It will bring out your artistic and creative side. And if you come in here more from the art perspective you’ll find that math and science is really tied into art,” explained Paul Hoffman, chief executive of Liberty Science Center.

“And that’s why we call this Beyond Rubik’s Cube, because it’s not about the cube. It’s about the intersection of engineering, that brilliant mechanism inside the cube; design, of course the colours of it, and mathematics - that 43 quintillion possibilities,” he added.

Starting on Saturday, the exhibit will be open to the public for seven months at the New Jersey location. Afterwards it will travel the world - for a scheduled seven-year run.