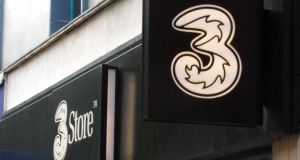 The service breakdown - which Three Mobile blamed on a third party provider - came just minutes after the company announced it had bought rival 02 for close to a billion euro. Photograph: Lewis Stickley/PA Wire

Three Mobile said this afternoon that service has been resumed to all its customers after the telephone network suffered a major collapse this morning leaving hundreds of thousands of customers unable to make calls, send text messages or access data.

The breakdown - which Three Mobile blamed on third party provider Virgin Media - came just minutes after the company announced it had bought rival 02 for close to a billion euro.

Its network went down at about 9am and while it returned to some pockets sporadically over the course of the morning many thousands of its customers were left without a functioning network until after 1pm.

Users were contacting The Irish Times up to shortly after 2pm to say the service had not been restored in full.

The collapse is likely to have angered many of its existing customers while many users of the O2 network will also have been concerned.

The takeover, when it is completed, will take Three’s market share to 37.5 per cent and bring subscriber numbers to two million active users. The two companies had combined revenues of € 803m in 2012, which compares to 3’s revenue of € 174m in 2012 on a standalone basis.

“As part of a programme of work which Virgin Media Business began last month, a software upgrade today caused a temporary outage on the Three network in Ireland,” Virgin said in a statement.” Service was restored by lunchtime. Virgin Media Business apologises to the customers of Three Ireland for any inconvenience caused.”