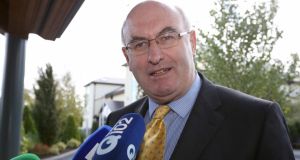 Some €15 million more has been taken by the Government in motor tax payments so far this year than in the same period last year, according to the Department of the Environment.

The figures come ahead of today’s deadline for the closure of the so-called motor tax exemption loophole.

Previously, motorists with untaxed vehicles could submit a non-use declaration at a Garda station. The signature of the declaration had to be witnessed by a garda, but no other documentary evidence was required to remove the liability to pay motor tax.

The system was open to abuse as it left the possibility of motorists continuing to drive after their tax had lapsed and afterwards explaining the gap in their cover by declaring their car was off the road.

The new rules require anyone intending to take their car off the road to make a submission in advance to the motor tax office, and not gardaí, and to pay any arrears plus a minimum of three months’ tax.

Close of business
Motorists have until the close of business today to notify their local tax office if their vehicle has been off the road and untaxed, and make any due payments.

The Irish Farmers’ Association last week appealed to Minister for the Environment Phil Hogan to extend the deadline because of the financial burden the new regime would put on some farmers.

Mr Hogan said that while he had sympathy for farmers he had given a three-month lead-in to the new system and did not feel a further extension was warranted.

“The evasion is estimated at €55 million per annum. This is a burden on those people who pay their tax as they should, and is a loophole that needs to be closed.

“Motor tax receipts for September are just over €82 million as opposed to €67million for the same date last year. Some of the increase is due to the budget increases last year, but the estimated increase due to closing the loophole is €8 million in the month,” he added.