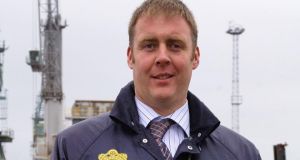 Detective Garda Adrian Donohoe who was killed last January. He was fired on by raiders outside the credit union in Bellurgan, Jenkinstown, Co Louth. Photograph: Ciara Wilkinson.


The chief suspect for the murder of Det Garda Adrian Donohoe has fled Northern Ireland and is believed to have entered the US illegally.

The man, who is in his 20s and is from south Armagh, remained in the North for after the shooting dead of Garda Donohoe during a raid on a Co Louth credit union in January. However, in recent weeks he has left and gardaí believe he is in the US.

Gardaí are working on the theory that the suspect was one of five gang members at the scene outside Lordship credit union in Bellurgan on the Cooley Peninsula when Garda Donohoe was shot in the head. He was fatally wounded when he got out of his car to check why another vehicle had driven across the exit of the car park.

The man who has left for the US is suspected of having fired the fatal shot.

Garda Donohoe and his partner were due to provide an armed escort to credit union staff transferring money from the Lordship credit union into a night safe in Dundalk on the night of Friday January 25th.


Investigation
The chief suspect’s departure to the US will greatly complicate the investigation and make it difficult for the team of gardaí investigating the murder of their colleague to progress the case to the point of charging the man.

Evidence gathered by the investigating team would need to be put to him under caution and his replies included in the file on the case for the DPP before it could be determined if there existed enough strong evidence to charge him.

However, gardaí cannot extradite suspects for the purposes of questioning them about crimes.

A suspect can only be extradited from a foreign jurisdiction to the Republic if the DPP has recommended criminal charges be brought against them.

Although the suspect was living in the North, arrangements that exist between the Garda and PSNI would have facilitated a smooth investigation unimpeded by the Border.

The arrangements would have seen the man arrested in the North, where the PSNI would have put questions to him prepared by the Garda. Members of the Garda are permitted to be present during such interviews.

The replies to questions can then be added to the Garda file and sent to the DPP.

Konta takes on Gauff and Murray faces Wawrinka at French Open 22:30
UN and UK to host climate event on Paris Agreement anniversary 22:30
Man found guilty of murder of Ciara Glennon and second woman in 1990s 22:00
Traffic figures for Dublin ‘slightly down’ on pre-Level 3 restrictions 21:52
No deadline set for restoration of Shelbourne Four statues 21:44