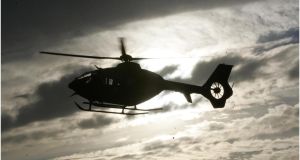 A new report has recommended that paramedics on the ground should have the means to contact helicopter pilots directly in the case of emergency. Photograph: Dara Mac Dónaill/The Irish Times

Better use of radio links between emergency ground staff and Air Corps pilots and enhanced training for paramedics in air safety awareness are among key recommendations of an air accident report which has just been released.

The findings follow an incident on June 19th last year when a helicopter, called to lift a patient to hospital, struck power lines as it came in to land. The pilot executed an emergency landing in a field without serious injury to crew or anyone on the ground. The power lines were cut by the aircraft’s rotors.

According to air accident investigators the air ambulance-equipped Air Corps helicopter, had been tasked by the National Aeromedical Co-ordination Centre (NACC) to collect a patient from a Health Service Executive (HSE) road ambulance near Borrisoleigh, Co Tipperary. The crew were then to transfer him to Limerick Regional Hospital for treatment.

The investigators found that the weather en route from its base at Custume Barracks Athlone, Co Westmeath to the intended pick up point was good.

However on approach to landing in a field, the helicopter’s main rotor blades struck ESB 220kV overhead wires and severed them.

This caused “severe airframe vibration and a momentary oscillation of the helicopter, forcing the pilot to carry out an immediate forced landing, which was heavy,” they report.

The pilot then shut down the engines and the crew exited safely and uninjured. “As there was substantial damage evident to the helicopter, the patient was transferred to hospital by road.”

Air Accident Investigation Unit chief Thomas Moloney has recommended that paramedics on the ground should be given the means to contact directly the helicopter pilot.

The report also calls on the HSE to provide an “aviation awareness module” for emergency crews on the ground to help them inform pilots of local landing conditions.

Mr Moloney has also called on the Air Corps to review the methodology of compiling the risk register for operational missions. The Air Corps has said this has already been complied with.

Finally, the report suggests the Air Corps should consider the installation of automatic flight-following systems on helicopters involved in aeromedical missions.

0:58 The moment Alexei Navalny got detained on return to Moscow