‘Looking after your health is not a sign of weakness’ 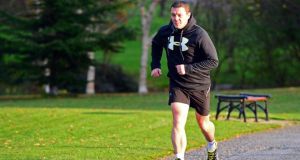 It took years but eventually Killian Byrne’s moment of truth arrived and the 20-stone conference organiser started turning around his life.

His father had died of a stroke at 51 and, Byrne recognised, he was headed in the same direction, thanks to a life of overindulgence and inactivity.

“Through my involvement in the Leinster supporters’ club, I presented trophies to two retiring players, Malcolm O’Kelly and Girvan Dempsey,” Byrne recalls.

“There was only one word to describe me in the photograph – round. My belly was sticking out and my face was as a red as a fire engine.”

Byrne had known for some time that he had to change his diet and get active and always felt he would be able to do this, but up to that moment it was always a task for “tomorrow”.

“It was just easier to sit on the couch. Working from home, it was too easy to dip into the cookie jar, or when cooking, to eat two or three portions of lasagne.”

The first port of call on his new life was his GP, who confirmed the high cholesterol levels and high blood pressure that he probably already
suspected.

Byrne started exercising, firstly by starting a 20-minute walk he could barely complete and then participated in RTÉ’s Operation Transformation.

Over the past 18 months, he has lost 5½ stone, run two marathons and has recently completed his first triathlon.

Yesterday, he joined with the
Irish Cancer Society in urging men not to take good health for granted.

“It’s important to realise that we are not invincible,” he says. “Looking after your health is not a sign of weakness but a sign you are in control.”

Byrne’s advice is concise: be honest with yourself and your family; understand your
food issues; keep a food diary; understand the necessity for exercise and take one day at a time.