When running with a short-legged German dog, people see you differently 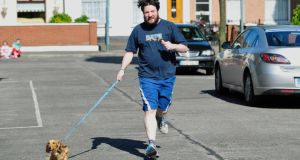 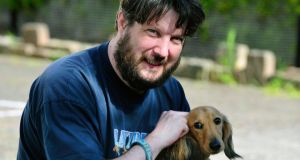 I called to my friend Q’s house for our regular Saturday morning jog.

“You know me. We run together regularly,” I replied.

To tell the truth, we hadn’t been out for a run in almost a month. But I still see once a month as regular. I mean, if it was menstruation or a Viking raid, you’d consider it regular. Q doesn’t agree.

“You do look familiar,” said Q. “But it’s a vague memory and one mingled with pain for some reason.”

“A month ago we ran a 10km run through the city at night,” I said. “It was awful. You cried a bit. I was the man weeping beside you. You’re still wearing the complimentary yellow top they gave us.”

He glanced down at his clothes. “I don’t know what you’re talking about,” he said, casually taking some tobacco from the specially designed tobacco pouch in the shoulder of the yellow running top. (The organiser’s official line is that this pouch isn’t for tobacco, it’s for keeping your keys. But if that’s true then why is Q’s shoulder pouch stuffed with tobacco? Huh?).

He began rolling a cigarette. His coldness wounded me and I whimpered.

“Ah yes, I remember you now,” he said, recognising my whimper. (I whimper a lot when running. It’s kind of my thing.)

“How time has corrupted your once fresh features,” he added shaking his head sadly.

He did. He did have a dachshund. And he was under instructions to exercise it. The dachshund loomed beneath Q (in as much as a dachshund can loom).

Usually when I imagine running with a dog, I see myself bounding across the frozen mountains of northern Westeros with a tremendous direwolf like Jon Snow has in Game of Thrones and Channel 4’s Jon Snow probably has in real life.

That said, Q’s dachshund also has a very healthy self-image and doesn’t realise he isn’t a direwolf. He regularly picks fights with other larger dogs as we pass. Truth be told, he’s a bit of a bollocks. We spend a fair amount of time disentangling Q’s dachshund’s lead from the leads of other less violent animals.

Running tips
Still, having gone running with Q’s dachshund on several occasions now, I have many theories about running with dachshunds and I’d like to share a few with you.

a) Despite having short legs, dachshunds are among the world’s fastest mammals and this is why Q’s dachshund is able to keep up with us, and sometimes, in fact, looks like he’s just strolling, or indeed, standing totally still.

b) Dachshund is German for “badger dog” (this is true) and thus people who see the three of us running assume that we’re some sort of anti-badger strike force who play by their own rules and are really tough.

c) Q’s dachshund, despite being a tiny dainty little thing over which we tower, has a mystical slimming effect on us not unlike wearing vertical stripes.

Running with a dachshund has certainly changed the game for Q and me as runners. People see us differently.

I often gaze at Q and his dachshund and wonder how I could improve our look even further.

Perhaps I could start pulling a child’s toy car on a string behind me as I run? Maybe I could wear a bonnet?

Then we’d look totally awesome and not at all ridiculous.