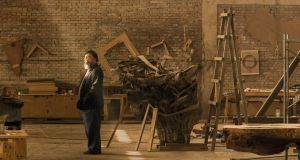 The recent discovery of a “superhenge” of nearly 100 standing stones near Stonehenge has left archaeologists in a state of excitement, but we ordinary visitors will struggle to share the glee as the stones are all below ground. Here are five sites (not including Stonehenge) that you can see:
Maiden Castle (near Dorchester;  english-heritage.org.uk) The largest and most complex of Britain’s iron age hill forts, Maiden Castle’s steep-sided chalk ramparts extend along a hill across an area roughly the size of 50 football pitches. It was built around 500 BC and was an important centre of regional life.
Uffington White Horse (Wantage, Oxfordshire) Britain’s oldest and most famous chalk figure is the bronze age Uffington White Horse is just below the crest of the highest point in Oxfordshire. It was designed around 1000 BC by cutting slabs into the hillside and filling them with chalk: locals have maintained the figure ever since.
Great Orme Mines (Llandudno, Wales;  greatormemines.info; admission £6.75) The oldest bronze age copper mine in the world that is open to visitors, this fissure was probably ancient Britain’s most important source of the material that fuelled the bronze age. You can explore the 3500-year-old tunnels via a self-guided tour.
Maes Howe (Orkney, Scotland;  historic-scotland.gov.uk; admission £5.50) Scotland’s answer to Brú na Bóinne, Maes Howe is a 5,000-year-old stone age tomb that is made even more extraordinary by the fact that in the 12th century a group of Vikings sheltered from a blizzard within its passageway...and decorated the walls with runes and other graffiti to pass the time.
Skara Brae (Orkney, Scotland;  historic-scotland.gov.uk; admission £7.10) Northern Europe’s best-preserved prehistoric village predates Stonehenge, but it took a storm in 1850 to reveal it from beneath the dunes – which explains why it’s relatively intact.
AUTUMN ART IN LONDON
Today marks the opening of the first major UK exhibition by Ai Wei Wei (pictured), the most famous artist to emerge from post-revolutionary China. The exhibition at the Royal Academy (royalacademy.org.uk; £17.60) covers the last 20 years of his work and stretches across all forms from conceptualism to architecture (he consulted on the Bird’s Nest stadium in Beijing) and is a sorrowful and acerbic comment on the nature of creative freedom, censorship and human rights, as well as an examination of contemporary Chinese art and society. Until December 13th. The World Goes Pop at the Tate Modern (tate.org.uk; £16) runs until January 24th, and covers pop art during the 1960s and ‘70s. The National Gallery (nationalgallery.org.uk; £18) is readying for its first exhibit of portraits by Goya, running October 7th until January 10th. Meanwhile, the Barbara Hepworth retrospective at the Tate Britain (tate.org.uk; £18) closes October 25th. Advance bookings for all of these shows is strongly advised.
DENGUE FEVER HITS VIETNAM
Vietnam has seen a marked increase in the number of reported cases of dengue fever. Nguyen Minh Tuan, head of the dengue fever faculty at the Children’s Hospital No 1 in Ho Chi Minh City (right), said more than 25,000 cases have been reported nationwide this summer, 2½ times as many as the same time last year. Mosquitos are the main vector of the virus, which results in severe flu-like symptoms and can be fatal if untreated: so far, there have been 16 fatalities. If you are going to Vietnam, use an insect repellant with at least 20 per cent diethyltouamide (DEET) and wear light colours (mosquitos are attracted to dark colours)
UNIVERSAL EXPANSION
The Cabana Bay Beach Resort Hotel at Universal Studios in Orlando is to add 400 new rooms to its existing 900 by 2017. The retro-themed hotel (it’s designed like a mid-century American motel) has been extraordinarily popular since opening in March 2014 for its affordable family sized rooms including a kitchenette that sleep up to six people. There are two pools, a waterslide, lazy river and a 10-lane bowling alley. As the hotel is on-site guests can also avail of early admission to the parks and complimentary transportation to and from the entrances and Universal CityWalk. See  universalorlando.co.uk for more
NEW ZEALAND’S ROCK BOTTOM AIR FARES
Domestic flights in New Zealand have never been cheaper, thanks to an ongoing price war.
Qantas’ low cost carrier Jetstar expanded its regional network on August 31st and celebrated the launch by offering 16,000 flights for $9 – which prompted Air New Zealand to match the fares on its own website.
The fares war is now in its third week with regional fares on both carriers available for between NZ$35 and $49