Travel Desk: Parisian summer, where to go in Denmark, and a guide to Turin 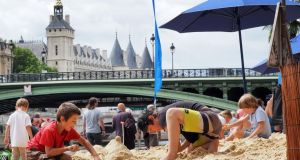 Paris has gone summer crazy with a 3.5km beach – above – along the Seine (between the Pont Neuf and Pont du Sully), paddle boating and sailing in the Bassin de la Villette (in the 19th arrondissement) and beach volleyball and other sports in front of the Hôtel de Ville. All will remain open until the end of the month and are free.

Meanwhile, it has just been announced that the Rodin Museum, which has been closed for three years due to extensive renovation work on the magnificent Hôtel Biron that has hosted the museum since 1919, will finally reopen on November 12th, on the 175th anniversary of the sculptor’s birth. See musee-rodin.fr.

Five places to go in Denmark, besides Copenhagen

A newly published report by the World Economic Forum on travel and tourism has found that outside Copenhagen, Denmark doesn’t have a whole lot to offer the visitor. Here’s five places that definitely have the capacity to please:

Ærø Of Denmark’s 406 islands, this is perhaps the most beautiful. Just south of Funen (Fyn), this is a place caught in a pleasant time warp, with cobblestoned villages punctuating a landscape dotted with thatched-roofed, half-timbered houses and old windmills; and sandy beaches lined with the kind of bathing huts you’d have found in the 19th century.

Aarhus Denmark’s second city is terribly overshadowed by Copenhagen, but it has a thriving dining scene and terrific nightlife (courtesy of the large student population), not to mention one of the best art museums in the country, the ARoS Aarhus Kunstmuseum, whose most outstanding feature is the circular skywalk called Your Rainbow Panorama.

Bornholm Danes have a soft spot for this island about 200km east of the mainland. It’s a place of thriving artistic communities and thatched villages where you’ll also find fish smokehouses – a clue to its blossoming reputation as a foodie destination promoting the very best of new Danish cuisine.

Ribe Denmark’s oldest town is about 300km west of the capital on the mainland, and it’s quite the picture-postcard: a soaring 12th-century cathedral that towers over the cobblestone streets lined with 17th-century half-timbered houses – some of which have been converted into gorgeous boutique hotels.

Skagen During the 19th century, this town on the country’s northern tip was a mecca for artists, who came to explore its ruggedly beautiful landscape. As a result, Skagen (pronounced ‘Skain’) has become a major tourist destination – besides the countryside, these days they come for the beaches, art museums, historic old town (with its distinctive red-roofed houses) and excellent restaurants.

Stake out the tenderloin

Last week saw the opening of San Francisco’s newest museum, devoted to the history of the Tenderloin district.

Once synonymous with vice, this downtown neighbourhood played a key role in the city’s social history, offering a haven to Asian refugees after Vietnam, incubating the LGBT movement and drawing in a variety of artists and musicians, from Miles Davis to the Grateful Dead.

All of this is explored in the museum, which also offers guided walking tours of the district. A combined ticket costs $15 (€13.63) ; see tenderloinmuseum.org

The Farnham Estate Golf & Spa Resort (farnhamestate.ie) in Cavan has a picnic-and-massage deal from €329 per couple midweek that includes B&B, dinner, afternoon picnic and massage. The Lodge at Ashford Castle (thelodgeac.com) in Co Galway hosts watercolour classes every Wednesday afternoon: a B&B costs from €155 per room with classes an extra €30. Finally, the Radisson Blu Hotel and Spa (radissonblu.ie/hotel-sligo) in Rosses Point, Co Sligo, has a weekend leisure break offer for €189 per person sharing.

Virgin America has announced plans to deliver high-speed internet on its planes from September. The new service is in partnership with communications company ViaSat and promises to be “eight to 10 times faster” than existing in-flight WiFi.

Meanwhile, Royal Caribbean Lines’ new internet service, called Voom, which the company says is six times faster than any other internet at sea, will be available for free on Majesty of the Seas when it resumes sailing in the Caribbean next summer after an upgrade.

Virgin America and Royal Caribbean might be leading the way on in-flight and on-board high-speed internet, but it’s only a matter of time before the aviation and cruise industries follow suit.