Travel Writer: Neil Blackbyrne on a journey across the Mongolian Steppes 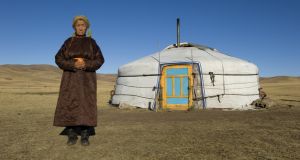 Two rosy-cheeked little cherubs tumbled playfully with happy squeals around the ger, a traditional round Mongol tent, the novelty of a guest making bedtime a reluctant conclusion to the evening’s fun. On my part, the flush of childish happiness was more than mutual.

I had crossed the border from Russia two days before.

While the breath still froze in front of my face, the dusty orange dawns and purple dusks of the Mongolian desert were warmer on the eye than the snow and ice of Siberia.

In the coldest capital city in the world, Ulan Bator, I hired a guide and we set out in a little red Nissan van to explore the vast swathes of the Mongolian Steppes, where hundreds of miles of featureless horizons made the occasional sight of a golden eagle perched on the side of the path or a megalomaniacal silver statue of Genghis Khan all the more awesome.

As pantheistic brushstrokes painted the sky from day to dusk the little van chugged diligently across the scrub until a small white ger came slowly into view. Outside, a man in a green smock tied with a bright orange sash was securing a horse to a post.

He shook our hands with a smile and beckoned us inside his home where his wife was preparing dinner while his two young girls watched cartoons on a television powered by a car battery.

Reaching for a jug of fermented horse milk or airag, he filled a small copper bowl and invited me to drink. My face momentarily betrayed my stomach’s misgivings but I accepted as I had been shown beforehand, right palm outstretched, fingers of the left hand under the elbow of the right arm and head bowed.

Hard-earned teenage lessons of illicit cider served me well as I swallowed the contents in two big gulps, much to his satisfaction. Passing back the bowl I hoped he didn’t notice the second hard swallow to keep it all down.

My guide pointed out the wonderful orange colour of the beams supporting the roof and how it matched the colour of the sash our host wore. “Very important colour to Mongolians,” she said. “It represents morning.”

As the airag warmed our senses and the sing-song voices filled the ger, the ritual of the copper bowl continued as we rolled sheep’s ankle bones for sport and I instructed the children in the ways of the Western selfie.

Our host then asked what age I was and whether or not I was married. When he heard I was 30 and unmarried he smiled softly in wonder at the nonchalant nature of my response.

The jug drained, we nestled under a mound of animal skins on the floor drunk in the warmth of the welcome and the unspoken companionship of sharing.

Before we fell asleep our host made one final wish: “The next time you come to Mongolia, ” my guide translated, “we must all visit his brother.”