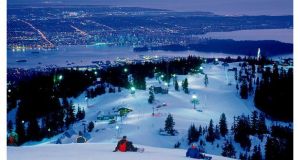 The host city of next month’s Winter Olympics was built by people who love the great outdoors, writes JOANNA ROBERTS

Getting to see this view, however, can take a bit of an effort. Yes, there’s an easy route up the mountain: just take the gondola that lifts you high above the trees and the pen where film-star wolves go to retire and glide effortlessly to the summit. But if you fancy a challenge (or you’re on a budget) there’s always the 2,830-step trail up the mountain’s southern face.

The Grouse Grind – also known as Mother Nature’s Stairmaster – is a well-worn hiking trail that is equally popular with visitors and with locals, who pop in for a quick “grind” on the way home from work. The wooden steps are packed with people of all ages, some hoping to beat their previous times, others just praying they reach the top.

It’s a punishing ascent, the worst point being the quarter-way mark, which tells you, somewhat unhelpfully, that the remainder of the trail is extremely steep and treacherous.

But if you get into a steady rhythm and pretend not to notice the people who are coming down after abandoning their attempts, then you’ll be rewarded not only with a magnificent view but also with the most welcome cold beer of your life.

It’s hard to escape the feeling that this part of Canada was built by people who loved the outdoors – as befits a city that next month hosts the Winter Olympics.

Granted, Vancouver has a natural advantage. Trees, ocean and mountains are pretty strong basics, and its location in southwestern Canada provides a pleasant Goldilocks climate: neither too hot nor too cold. But it’s the way that nature has been invited in – trees lining every street, beaches by the business district, parks aplenty – that shows this green and pleasant city owes as much to foresight as to serendipity. From the beginning Vancouver’s expansion has been guided by the desire to avoid urban sprawl and maximise green space.

The result is a lively and relaxed metropolis that works with its surroundings rather than fights against them. Despite being in a city of more than 500,000 people, you never feel far from the great outdoors.

The jewel in the crown is Stanley Park. Jutting into the Pacific at the western tip of the skyscraper-dominated downtown district, this old military base has been a public park since 1886. A bike ride around the nine-kilometre sea wall, with the trees on your left and ocean on your right, pausing frequently to coo at racoons or for a quick dip in the icy sea, is one of the most pleasant ways to spend a sunny afternoon.

Although no trip to Stanley Park would be complete without seeing the totem poles and the beaches, don’t overlook the wooded interior, which is crisscrossed with paths ripe for exploration. A stroll around the Lost Lagoon is a less hectic option than the sea-wall circuit, which is always a hive of activity. Lunchtimes are particularly busy, as office workers slip out of their suits and into their Lycra to jog, cycle or roller-blade around the park.

Hyperactivity is rife among Vancouver’s residents: even after dark the streets come alive with people taking their dogs for a speedy power walk. A clue to the source of their energy comes from the Thermos mugs that seem to have been grafted on to people’s hands.

Coffee shops are Vancouver’s public houses, with the venues (and, presumably, the customers) buzzing well into the night. With Seattle just down the road it is perhaps inevitable that Starbucks is ubiquitous, although it has healthy competition in Vancouver’s own Blenz chain, as well as numerous independent outlets.

If it’s more traditional public-house refreshment you want, there’s plenty to be had. In Vancouver alcohol tends to be consumed with food, music or both. Local beers, particularly from the Granville Island brewery, are available in most places and are tastier than the better-known Canadian brands, and Canadian wine is surprisingly good.

Food is generally excellent and good value, although we made the mistake of overordering, forgetting about North American portion sizes.

With plenty of diversions it’s easy to become cocooned downtown, but it’s worth making the effort to explore farther afield. Take the ferry across False Creek to Granville Island, to see its brewery, craft shops and food market, then carry on to upmarket Kitsilano and, arguably, the best beach in Vancouver. If you’re interested in aboriginal heritage, then from here pop along to the University of British Columbia’s Museum of Anthropology, which houses an extensive collection of First Nation artefacts.

And a whole section of tourismvancouver.com is dedicated to “gay-friendly Vancouver”, which proudly announces that the city has the largest gay population in western Canada.

Thanks to efficient public transport, getting around is spectacularly easy. One ticket lets you travel anywhere within the city limits, and a journey can often be a highlight in itself. A ride on the elevated SkyTrain gives an overhead view of the city, while heading north towards Grouse Mountain means a trip on the SeaBus, which provides a magnificent sea-level vista of downtown Vancouver as you zip across Burrard Inlet. However you choose to spend your time, it’s easy to see why Vancouver has repeatedly been named the world’s most liveable city. Beautifully located, good value, great food, friendly people . . . I’m not going to argue. But then I guess it was planned that way.

More than 5,500 athletes and officials and 10,000 media people will be heading for Vancouver and the Whistler ski resort, which hosts this year’s Winter Olympics, from February 12th to 28th, and Winter Paralympics, from March 12th to 21st.

Whistler, one of the world’s top ski resorts, is about a two-hour drive from Vancouver. Quite a few sports events, such as figure skating and speed skating, as well as something called ice-sledge hockey, will be held in the city. Olympic buses will move people back and forth.

Accommodation still seems to be available, but, if you are tempted to make a booking, best to move quickly, before it is snapped up.

Where to stay, where to eat and where to go in the city

The Opus. 322 Davie Street, Yaletown, 00-1-604-6426787, opushotel.com/vancouver. Situated in the historic warehouse district of Yaletown, this contemporary boutique hotel is acclaimed for its stylishly decorated rooms. Yaletown has acquired a reputation for being vibrant and ultra-chic, and the Opus fits right in. From 239 Canadian dollars (€156) for a standard double.

Moda Hotel. 900 Seymour Street, 00-1-604-6834251, modahotel.ca. This four-storey building in the heart of downtown Vancouver dates back to 1908. It has been completely refurbished to form a smart, contemporary boutique hotel with plenty of entertainment on the doorstep. Double rooms from $109 (€71).

Hapa Izakaya. 1479 Robson Street, 00-1-604-6894272, hapaizakaya.com. A Japanese tapas-style bar with melt-in-the-mouth sashimi and excellent cocktails. It is particularly good for group dining, as you get to sample more dishes.

Las Margaritas. 1999 West Fourth Avenue at Maple, 00-1-604-7347117, lasmargaritas.com. This Kitsilano restaurant serves generous portions of Mexican food and margaritas as big as your head. The outside terrace is lively and popular with the after-work crowd.

La Bodega. 1277 Howe Street, 00-1-604-6848814/5, loopdeloop.ca/labodega. Established in 1972, this Spanish tapas restaurant is positively ancient by Vancouver standards. The food is the usual tapas fare – and the sangria is excellent.

Lift. 333 Menchions Mews. 00-1-604-6895438, liftbarandgrill.com. This waterside restaurant is worth going to just for the roof terrace and beautiful views into Coal Harbour. The food can be pricey, but try the “whet plates” for a cheaper option.

Cactus Club. 357 Davie Street, 00-1-604-6858070, cactusclubcafe.com. You can eat very well and for a decent price at this Canadian chain whose goal is that “every customer leaves happy”. It has five restaurants in Vancouver.

Grouse Mountain. 6400 Nancy Greene Way, North Vancouver, 00-1-604-9840661, grousemountain.com. Do the Grouse Grind if you’re up for a challenge; otherwise, take the gondola. Treats at the top include lumberjack competitions and a bear enclosure, as well as a restaurant and gift shop. There is good skiing in winter.

UBC Museum of Anthropology. 6393 NW Marine Drive, 00-1-604- 8225087, moa.ubc.ca. If you’re interested in the First Nation culture of British Columbia, this collection of art and artefacts is a good place to start. It explains everything you need to know about totem poles, as well as life in and around Vancouver before the modern city was established.

Stanley Park. North foot of Georgia Street, vancouver.ca/parks/parks/ stanley. A 400-hectare wooded park surrounded by the Pacific Ocean. Highlights include the totem poles, the Nine O’Clock Gun and the Lost Lagoon. A cycle around the nine-kilometre sea wall is not to be missed.

Vancouver Art Gallery. 750 Hornby Street, 00-1-604-6624719, www.vanartgallery.bc.ca. Located in the former courthouse, the gallery houses works from artists in the Vancouver and British Columbia region, most notably those of local artist Emily Carr.

Granville Island. Under Granville Street Bridge, granvilleisland.com/en. This public space devoted to art and crafts is not really an island, although you can reach it by water taxi from downtown. There’s a great food market, small craft galleries and one of the best breweries around.

Railway Club, 579 Dunsmuir Street. 00-1-604-6811625, therailwayclub.com. Originally a club for workers on the Canadian Pacific Railway, this late-night venue has live music and cold beer every night. It’s easy to miss: look for the sign above the 7-Eleven at the corner of Dunsmuir and Seymour.

Robson Street is the main shopping street downtown, with a wallet-emptying mix of high-street and designer stores. For something a little more original, trawl the second-hand and vintage stores on Main Street between Broadway and 20th Avenue.

A tribute to Canadian rock icon Neil Young, a Joni Mitchell eco-ballet and Robert Lepage’s Blue Dragon play are included in a Cultural Olympiad being held until March.