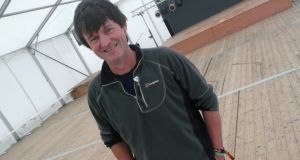 Micheál Ó Foighil: ‘If language learning can be associated with something enjoyable, it makes the learning experience much deeper’

The hall is empty now, and the rain is bucketing down outside, but Mícheál Ó Foighil is in mighty form. “This is where we had the greatest party of all time,” he says, showing me the massive room where they filmed the music video that has become a huge hit on YouTube.

Here, at the back of Coláiste Lurgan, an Irish-language summer college in Indreabhán in the heart of the Connemara Gaeltacht, students and staff performed their take on Avicii’s hit Wake Me Up in July. The video has now garnered more than a million views on YouTube.

“It’s the biggest number of hits ever for an Irish-language song on YouTube”, says Ó Foighil proudly. “We knew when we were filming that we were doing something different, something special. We started at 7.30am and we didn’t finish until 3am, but it was eight hours of pure joy. The energy, the buzz was electric.”

Lurgan’s videos had already attracted a lot of attention on social media. A rendition of Pitch Perfect’s The Cup Song has had well over 400,000 views.

Mícheál Ó Foighil, who has been the manager of Coláiste Lurgan since 1996, never expected this amount of attention. He maintains that the students are his priority, but “if it creates a buzz for them, that’s great”.

The enterprise dates back to a very rainy summer in 2009, when creativity was called upon to relieve cabin fever. Many videos later, they have a YouTube channel, TG Lurgan, and a recording studio.

He says it is all voluntary, not for profit. Everyone appearing in or working on the videos is either a student or staff, he says, except for a number of local professionals who have lent their support.

He sees the creative process as being hugely beneficial to learning. “Teamwork brings people together; everything is being done through Irish, but they don’t even notice it. The emphasis is not on the language but on the job at hand. The point is we’re doing the transition from learning to using. It’s a question of confidence. The more you practise, the more confident you get. If language learning can be associated with something enjoyable, it makes the learning experience much deeper, much richer.”

Coláiste Lurgan, one of the first purpose-built summer colleges, was founded in the late 1960s by Mícheál’s father, the late Pól Ó Foighil, who was an Irish-language activist and politician.

He feels the extent of the reaction to their videos online shows there is huge love for the language. “It re-enforces the idea that people do love the language. Even though they may not speak it, it’s part and parcel of their DNA. People will respond to an opportunity to engage with the language.”


Failed by the system
He sees most of the comments being posted on the videos highlight the fact that so many generations of Irish people are being failed by the system. “People are leaving comments lamenting the fact that they can’t speak their own native tongue, but that they’re proud of what we’ve done. Why is it that, after 13 years of schooling, most people cannot speak the language confidently?”

He puts this down to an ineffective education system. “The Taoiseach does have empathy for the language, but he is misguided. Ninety-five per cent of the budget that is spent on the language is spent through the Department of Education, but there is not much to show for it. Huge opportunities are being lost. The system is banjaxed. Irish people are being denied something precious in their lives by an ineffective system, and that’s sad.“

Ó Foighil says we are on dangerous ground regarding the language, because “the establishment is throwing in the towel . . . They are using it as an excuse that people can’t speak it, to downgrade it.”

He believes it is not too late. “The Irish language has a huge future. People want to learn it. What needs to be done is to get the education system functioning properly, and that is not a question of resources. They need to find out what right buttons to press to keep people engaged.”

The Lurgan team have certainly found the right buttons. Ó Foighil says there are eight more videos in the pipeline, and, adds “the next one is a very special one altogether”.

You can view all of TG Lurgan’s music videos on youtube.com/user/tglurgan

Do Irish people hate babies? Our irritation with them is embedded in our culture
7