Putting food-intolerance tests under the microscope

Do food-intolerance tests work or are they a waste of time and money? 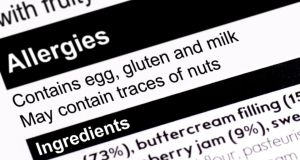 The food-intolerance industry has grown very quickly in recent years and most chemists stock tests which make claims to pinpoint intolerances.

Intolerances are different from food allergies, the best known of which is an allergy to peanuts.

The theory behind food-intolerance testing is that there are certain foods that the body treats as foreign substances and produces Immunoglobulin G (IgG) antibodies which attack the food in question and cause inflammation of the digestive tract.

This can lead to weight gain, bloating, tiredness, constipation and many other symptoms associated with a poor diet. By eliminating foods which cause the inflammation, the immune system can regulate the body better.

Scientific value
The jury is out on the scientific value of such tests, but a study carried out by the University of Miami indicates that it can be an effective means of adjusting one’s diet.

Prof John Lewis and his team in Miami concluded a study on tackling obesity by identifying food intolerances or hidden food sensitivities.

Blood tests can help identify food intolerances or hidden food sensitivities that may contribute to obesity, according to the study.

The average weight loss of the 125 people who participated in the trial was 12 pounds over three months.

Obesity link
Lewis says several studies have linked inflammation in the digestive tract to obesity. By eliminating foods which cause the inflammation, he says, the immune system can regulate the body better which lowers inflammation and helps people lose weight.

He concedes though that more research is needed on the subject of gut inflammation and obesity.

“Identifying specific foods that cause a reaction from an individual’s immune system and eliminating them from the diet could be an additional strategy for long-lasting and perhaps permanent weight loss,” Lewis says.

The study was published in the Journal of Obesity and Weight Loss Therapy in the United States.

It is believed to be the first to assess the effect of an Immunoglobulin G (IgG) food sensitivity test – in combination with a food elimination diet – on weight, body mass index, and quality of life in people who wanted to lose weight and/or were overweight.

“The food-intolerance test, along with proper nutrition (ie, nutrient sufficiency), in tandem with other measures such as exercise, could definitely be the way to approach the overweight/obese crisis,” he says.

“Regardless of what you eat, you must eat fewer calories than you expend every day and stay consistent with that caloric deficit over time to achieve meaningful weight loss.


Blood tests
One of the companies supplying finger prick blood tests in Ireland is YorkTest Laboratories.

The self-testing kits are sent away for analysis and the results are sent back to the person detailing varying levels of intolerance.

Ireland manager for YorkTest, Sonja Waters, says the tests have been proven to work in improving the general wellbeing of those who use them.

However, the claims made by food-intolerance companies and by Lewis are not generally shared across the scientific community.

Similar sentiments have been expressed by the European Academy of Allergy and Clinical Immunology which concluded that the tests “do not indicate [imminent] food allergy or intolerance, but rather a physiological response of the immune system after exposition to food components”.

“Therefore, testing of IgG4 to foods is considered as irrelevant for the laboratory work-up of food allergy or intolerance and should not be performed in case of food-related complaints.”


Examining claims
Dietitian Ruth George, who is secretary to the Irish Food Allergy Network, says it had examined the claims of food-intolerance tests very closely because of their popularity.

“We are not anti-alternative medicine, but we see no evidence that they are useful. They may be useful in other ways, but not for intolerance.”

George says services for people with allergies are “very poorly serviced” at present and need to be improved.