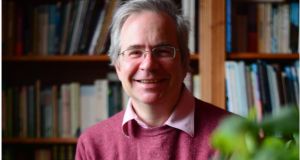 Dr Stuart Neilson: ‘The book is also for people who might be wondering if they fit on the spectrum but are unsure.’ Photograph: Bryan O’Brien

The removal of Asperger’s syndrome from the most recent edition of DSM (Diagnostic and Statistical Manual of Mental Disorders) is a source of concern for people with the condition, says Dr Stuart Neilson, one of the authors of a recently published book, Living with Asperger Syndrome & Autism in Ireland . However, Neilson, a 50-year-old mathematician who lectures on the Autism Spectrum certificate course as part of disability studies at UCC and was diagnosed with Asperger’s syndrome in 2009, is not concerned about the American Psychiatric Association’s subsuming of Asperger’s syndrome to the ASD (Autism Spectrum Disorder) label.

Asperger’s syndrome is one of the autism spectrum disorders that impacts on how the brain processes information. Neilson, who welcomes the Autism Bill that is progressing through the Dáil, says “some people are very attached to their label.

There are all these fictional characters such as The Girl with the Dragon Tattoo and Sheldon from The Big Bang Theory who are said to have Asperger’s syndrome.

“There’s a kind of trendiness associated with [the condition] at the moment.” (Asperger’s was recognised only in 1994.)

However, many people with Asperger’s syndrome object strongly to the removal of this label as they do not wish to be categorised as having ASD or autism. They are also concerned that they may now become ineligible for medical or social services.”

These concerns “are unfounded”, says the spokesperson. “Those already diagnosed will not lose their diagnosis or be re-assessed to fit into the new DSM-V unless clinically necessary, in line with developmental changes.

Debates about diagnostic labels should not impede the proper assessment of need and the delivery of services to children. Any changes in diagnostic labelling should be monitored to see that it does not produce any unintended effects.”

Neilson’s co-author is Diarmuid Heffernan who also lectures on the Autism Spectrum course at UCC and is an outreach support worker with Aspect under the umbrella of the Cork Association for Autism.

He says there is “a huge discrepancy in costs for people with autism and for those with Asperger’s syndrome. Someone who has classical autism might be non-verbal and would have difficulties with daily independent living. They would most likely need residential care and intensive staffing.

“Therefore, the costs for profound or classical autism are much higher than the kind of supports needed for a person with Asperger’s syndrome. Giving a lump sum to ASD services may not address the needs of everyone on the spectrum. People with profound autism should get all the funding required to meet their needs.”

Apart from the Cork area served by Aspect, there is no support for adults on the ASD. The Autism Bill will include a register of people on the spectrum.


Asperger’s difficult to describe
Heffernan says through outreach work, he has realised how difficult it is “to actually describe precisely what Asperger’s syndrome is. People . . . are influenced by their socio-economic backgrounds and their childhoods, just like everybody else.”

Neilson says the book is aimed at people who have been diagnosed. “But it’s also for people who might be wondering if they fit on the spectrum but are unsure. Before I got the diagnosis, I was on medication for eight years for depression . . . I was also given anti-psychotic medication because I had a lot of obsessive thoughts. Between the two different types of medication, I lost the ability to read and to concentrate on mathematics. It took all the pleasure out of life.

“For me, there was nothing negative about my diagnosis. It was a diagnosis not just for me but for the whole family. My children and my wife have benefited enormously from knowing why some things are very hard for me and why I can sometimes be completely irrational.”

The book is also about services, bureaucracy, social settings and other aspects of life that can create problems for people on the spectrum, from adolescence to adulthood. It includes websites, references to helpful books and reviews of fictional accounts of characters on the autism spectrum in films, television and books.