Tanya Sweeney: Nostalgia isn’t the opiate of the masses you think it is

Is looking back at simpler times really that heartwarming? 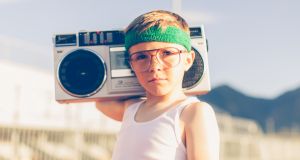 Were you really mad about the Smiths and the Goonies, or do you just think you were?

Along with banana bread, quizzes, Netflix and sourdough starters (whatever the heck they are), nostalgia has been called up for duty as a current-day opiate for the masses. Every which way you turn, its sickly sepia glow is lingering. We’re recalling old albums that “influenced” us on Facebook, like we’re Bob Dylan talking to Mojo Magazine. We’re watching reruns of classic GAA matches from the 1990s and shrieking joyously, even if we know full well the score at the final whistle. We’re watching Killinaskully and Pure Mule on RTÉ. What year is it? An utterly crap one, so I suppose we’re looking back at better ones.

Part of this is borne of necessity, and amid a dearth of new cultural material. But nostalgia has long been something that gladdens our hearts. A cool balm for the spirit, even in times not nearly as turbulent and unsettled as these.

Sometimes, we seem particularly fond of nostalgia in Ireland, and being transported back to pore over the artefacts of our collective past. Mention Ritz, McGonigle’s or That-A-Ways (ask your mum), and people come over all funny. Are we that proud of our cultural identity that we love to ingest it with our “tribe”, over and over again? Are we more comfortable with slower, simpler times? Or is something else at play here?

Psychologists identify nostalgia as a “warming” emotion that provides genuine comfort. Some experts say it’s even triggered by coldness – in 2012, participants in a US study reported stronger nostalgia on colder days and in colder rooms. In the same study, participants who talked about a nostalgic event perceived the ambient temperature as higher. It is quite literally heart-warming.

Most of us recall with intense fondness the events that happened in our youth, even if, subjectively, they weren’t the happiest times of our life. Yet we shape and reshape these life stories from our younger years, reworking the narrative into an ideal that lets us think we have grown, or come a long way since then. We’re also culturally conditioned, to an extent, to think of our formative years as a cuddly ideal of happy innocence.

But nostalgia might not be the warming mug of Cup-A-Soup you think it is. In fact, the word itself comes from Greek, “nostos” that means return and “algos” that means pain. The etymology cannot be more obvious.

Have you ever noticed that nostalgia can often be a tart cocktail of strange, overlapping feelings? A pinprick of recognition, the soporific sensation of familiarity, but then a sort of yearning as you try to hang on to that very feeling? The reality dawning that you’re a long way from there to here? And then, an entirely unwelcome pinch, that you might not be all that happy at how your life turned out in the end? Like finding a loose thread of a dream in your mind and trying to catch hold of it, the past doesn’t stick around for too long. It’s maddeningly always just out of reach.

The reason it’s a long way from there to here is because the “there” doesn’t really exist. It’s an idealised version of what really happened. It’s been said that the music we listened to at 17 is the music we will love our entire lives. Seventeen, when there were more exams, acne, angst and sticky alcopops than most of us could bear. And yet there we are, stewing in its soundtrack and thinking it absolutely glorious.

A few years ago, I was sent on a reporting assignment to the Gaeltacht, and found myself in the very same Irish college I went to as a teenager, 25 years previously. The plan was to see how much things had changed for today’s tranche of students, but there wasn’t too much to report on that front. It was the closest thing to time travel that you could imagine; the closest I’d ever gotten to holding on to that thread. Everything there was the exact same, from the ceilí music and the local chipper to the afternoon games. It was like trying to wear an old skin over my current one, and it felt confusing, exhilarating and weird all at once. More than anything, I felt oddly melancholic. Time was marching on inexorably, I realised that with clarity, and there was bob-all I could do about it.

A wise friend once told me that things weren’t better when we were younger – they were just as crap as they are today – we were just more stupid. Were you really mad about the Smiths and the Goonies, or do you just think you were? Did that All-Ireland final between Dublin and Donegal really light your fire at the time? Was Arctic Roll really that delicious? Or does it simply get better in the retelling? All I know is that I’m already vaguely nostalgic for a time when I wasn’t asked by Facebook friends to think about my 10 favourite albums. Now those really were the days.

Fixer-upper Gothic castle to call your own for €2.75m
4

5:53 Meghan Markle: 'The only wrong thing to say is to say nothing'